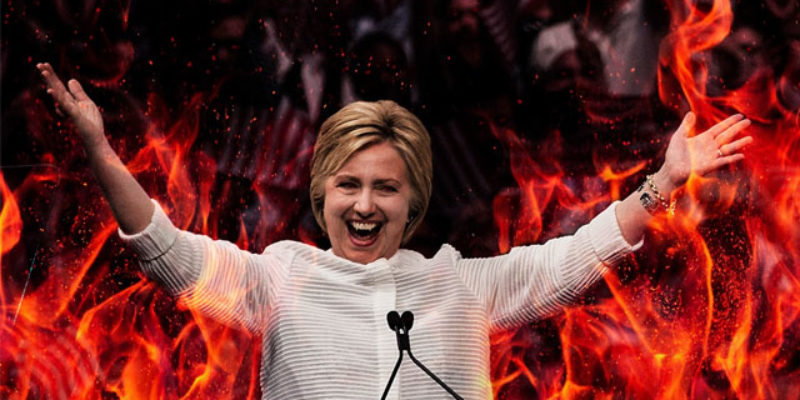 Some of our readers might have heard about the reports naming the Chinese, not Russia (though one certainly doesn’t exclude the other) as a culprit in the hacking of Hillary Clinton’s illicit private, unsecured e-mail server on which she was handling classified State Department and intelligence information in flagrant contravention of federal law.

A Chinese-owned company operating in the Washington, D.C., area hacked Hillary Clinton’s private server throughout her term as secretary of state and obtained nearly all her emails, two sources briefed on the matter told The Daily Caller News Foundation.

The Chinese firm obtained Clinton’s emails in real time as she sent and received communications and documents through her personal server, according to the sources, who said the hacking was conducted as part of an intelligence operation.

The Chinese wrote code that was embedded in the server, which was kept in Clinton’s residence in upstate New York. The code generated an instant “courtesy copy” for nearly all of her emails and forwarded them to the Chinese company, according to the sources.

The Intelligence Community Inspector General (ICIG) found that virtually all of Clinton’s emails were sent to a “foreign entity,” Rep. Louie Gohmert, a Texas Republican, said at a July 12 House Committee on the Judiciary hearing. He did not reveal the entity’s identity, but said it was unrelated to Russia.

Two officials with the ICIG, investigator Frank Rucker and attorney Janette McMillan, met repeatedly with FBI officials to warn them of the Chinese intrusion, according to a former intelligence officer with expertise in cybersecurity issues, who was briefed on the matter. He spoke anonymously, as he was not authorized to publicly address the Chinese’s role with Clinton’s server.

Among those FBI officials was Peter Strzok, who was then the bureau’s top counterintelligence official. Strzok was fired this month following the discovery he sent anti-Trump texts to his mistress and co-worker, Lisa Page. Strzok didn’t act on the information the ICIG provided him, according to Gohmert.

Gohmert mentioned in the Judiciary Committee hearing that ICIG officials told Strzok and three other top FBI officials that they found an “anomaly” on Clinton’s server.

The report, which originally appeared at The Daily Caller, was immediately disputed by the legacy media. CNN and others claim to have a quote by an FBI official disputing the story and another attacking President Trump’s tweet about it.

Report just out: “China hacked Hillary Clinton’s private Email Server.” Are they sure it wasn’t Russia (just kidding!)? What are the odds that the FBI and DOJ are right on top of this? Actually, a very big story. Much classified information!

Hillary Clinton’s Emails, many of which are Classified Information, got hacked by China. Next move better be by the FBI & DOJ or, after all of their other missteps (Comey, McCabe, Strzok, Page, Ohr, FISA, Dirty Dossier etc.), their credibility will be forever gone!

The FBI source denying the Daily Caller report wasn’t named. Given CNN’s pattern of fabricating stories based on false sources – most recently in the case of Lanny Davis fraudulently claiming that Trump knew about that Trump Tower meeting between his son and the Russian lawyer (and Fusion GPS client) Natalia Veselnitskaya in advance – nobody should be overly impressed with the denial.

Here’s what can’t be denied. If the Chinese did hack Clinton’s e-mails between 2010 and 2012, there is an awfully inconvenient coincidence between the hack and this…

The Chinese government systematically dismantled C.I.A. spying operations in the country starting in 2010, killing or imprisoning more than a dozen sources over two years and crippling intelligence gathering there for years afterward.

Current and former American officials described the intelligence breach as one of the worst in decades. It set off a scramble in Washington’s intelligence and law enforcement agencies to contain the fallout, but investigators were bitterly divided over the cause. Some were convinced that a mole within the C.I.A. had betrayed the United States. Others believed that the Chinese had hacked the covert system the C.I.A. used to communicate with its foreign sources. Years later, that debate remains unresolved.

But there was no disagreement about the damage. From the final weeks of 2010 through the end of 2012, according to former American officials, the Chinese killed at least a dozen of the C.I.A.’s sources. According to three of the officials, one was shot in front of his colleagues in the courtyard of a government building — a message to others who might have been working for the C.I.A.

Still others were put in jail. All told, the Chinese killed or imprisoned 18 to 20 of the C.I.A.’s sources in China, according to two former senior American officials, effectively unraveling a network that had taken years to build.

Is it implausible to think that a hack which reached into the e-mail server of the American Secretary of State might result in a rolling-up of our intelligence assets in the country performing that hack? Hardly.

Particularly given that there are countless ways hacks or phishing scams can penetrate e-mail networks.

Back in 2015, the Chinese perpetrated one of the most catastrophic breaches of U.S. government information when they hacked the Office of Personnel Management and got the employment information of some 22 million federal employees. Back then, blogger Doug Ross published an exceptionally interesting theory as to how that hack could have had something to do with Clinton’s e-mails. An excerpt from that post…

My contention is that Hillary Clinton’s use of a bathroom server led directly to the OPM hack, which cyber experts have called “a digital Pearl Harbor.”

Here’s how the attack chain worked from the perspective of the People’s Liberation Army (PLA).

2. PLA operative sends emails to various government officials using the accounts of HRC, Huma Abedin, Cheryl Mills or another senior official. Nothing gets the attention of a government apparatchik like an email from the likes of Hillary.

3. The emails contained a spear-phishing link with instructions to click on the link (e.g., “please check out these travel plans and see if they sync up with your schedule”) that installed malware on the targeted device. Predicted click-through rate: 70%+.

4. Targeted device is infected and then used to launch attacks inside applicable government network. These attacks take the form of reconnoitering on the compromised device (reading documents, emails, network drives, etc.); performing reconnaissance on the government network, and launching additional attacks.

In short, compromising Hillary’s email server was a gold mine for foreign intelligence agencies.

I can assure you we haven’t heard the last of tragic, needless compromises of America’s national security due to Hillary Clinton’s voracious lust for power and money.

Ross begins to look a bit prescient with the news the Chinese may have hacked that server. It wouldn’t be much of a surprise if that ended up being one result of her “extreme carelessness” or, perhaps better put, “gross negligence” in operating that e-mail server, or if another result was that a dozen and a half of our top intel assets in China were killed or imprisoned as a result.

And yet the same people who more or less buried the prosecution of the Clinton e-mail case are still hard at work attempting to connect Trump to the Russians. Do you really wonder why public confidence in the federal government has fallen to such low levels?