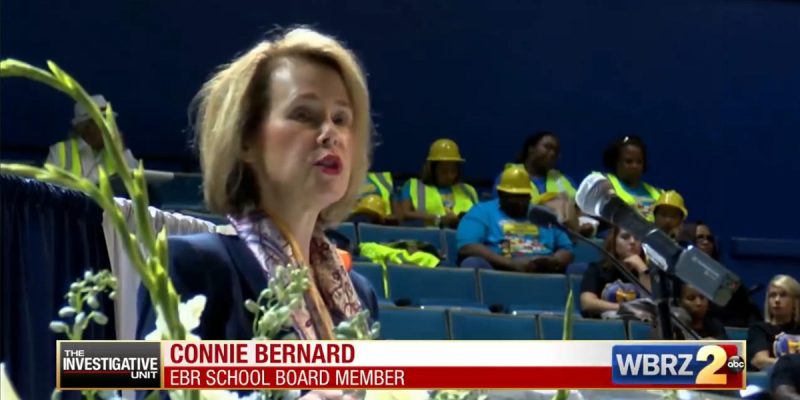 It seems Louisiana never runs out of material regarding the latest antics of our elected leadership offices. The latest perpetuation of this notion was further exemplified this weekend, when East Baton Rouge Parish School Board member Connie Bernard made quite an embarrassment of not only herself, but the parish she represents.

At around 9:50 Friday night, a group of teenaged individuals hosted a party on High Lake Drive, just off of Bluebonnet Blvd. As the party grew louder, their neighbor grew agitated to the point of taking action. That’s when Connie Bernard walked over to the house, entered through an unlocked door, and began taking pictures.

Upon her entrance, she was immediately asked to leave, a request she refused. As a means of leverage to get her out of the house as she made threats of calling 911, a partygoer grabbed her phone from her hand. Her reaction to this move was less than desirable, as she grabbed the eighteen-year-old by the throat, demanding her phone be returned to her, seasoning her demands with expletives.

And this being 2018, there was video of the fracas. WARNING: There is some not-safe-for-work language here…

CONNIE BERNARD, @EBRSchools Board Member BREAKS INTO HOUSE, goes around and takes pictures of everything, then grabs the guy who took her phone and is ARRESTED for a felony @WAFB @WBRZ @FoxNews pic.twitter.com/LobL05l15U

When police arrived, she was in the street, flagging them down. Upon questioning the victim, he neglected to press charges against Bernard, but she did receive a citation for a misdemeanor offense.

In response to recent news reports about an incident in my neighborhood Friday night, first, as a member of the East Baton Rouge Parish School Board, I want to offer an apology for distracting from the important work our students, educators and staff are doing.

Second, as a wife, mother and friend, I would like to apologize to my family and friends for any embarrassment and concern I may have caused them. Specifically, I would like to apologize for my language heard in that incident. I am grateful for the outpouring of love and support from colleagues, friends and family over the weekend. I will continue to work tirelessly in service to our community and humbly ask for your prayers and support.

I hope everyone understands that I am not able to comment any further on this incident. I plan to continue in my responsibilities and I will continue to work to maintain your trust and respect.

The EBR School Board has yet to announce any decision regarding disciplinary action against Bernard. With constant calls from lobbyists and the general public for education reform within the state, the last thing Louisianans want to have to concern themselves with is replacing educational leadership – though the case is being made in some quarters that could be necessary in this case. Bernard is unopposed for re-election on this fall’s ballot, so if she were to resign a special election would have to be called to replace her.

On Election Day in 2014, during Bernard’s last election cycle, a strange video (below) was recorded, supposedly depicting her shadily patrolling a neighborhood in a van stalking then-opponent Chris Bailey. While the context of the video content is not entirely certain, there is mention of yard signs being removed from residents’ yards.

If this School Board Member would like to continue to serve the people of her district and the students of EBR, it is highly advisable that she collect herself and refrain from further questionable activity.

Bernard’s website reads, “Connie Bernard has been your neighbor for over 45 years.” Let’s hope she tries to be better at it.