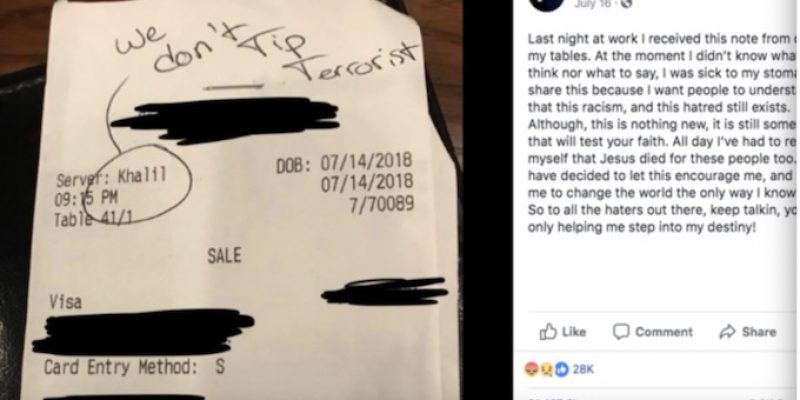 Khalil Cavil, a waiter at the Saltgrass Steak House restaurant in Odessa, Texas, claimed that a customer called him a terrorist and left him no tip. The restaurant then banned the customer and Khalil raise roughly $1,000 in sympathy tips from Facebook.

But Khalil made up the entire story.

According to the Odessa American, he admitted in an interview, “I did lie to you;” the incident at Saltgrass Steak House was a hoax.

But no one is reporting on this.

Yahoo! News and others spread a viral story: “A Texas restaurant has permanently banned a patron after the customer left a racist note reading ‘we don’t tip terrorists’ on their bill.”

It still has not been corrected.

The completely false Facebook post has been taken down. In it Khalil said he was “sick to his stomach” when he returned to one of the tables he was waiting to find “we don’t tip terrorist” written on a receipt.

“I didn’t know what to think nor what to say, I was sick to my stomach,” Mr Cavil wrote. “I share this because I want people to understand that this racism, and this hatred still exists.”

Khalil admitted that he actually wrote “we don’t tip terrorists” on the receipt.

“I did write it,” Mr. Cavil told the Odessa paper. “I don’t have an explanation. I made a mistake. There is no excuse for what I did.”

At least Khalil lost his job. He’s no longer at Saltgrass, which issued a statement.

“After further investigation, we have learned that our employee fabricated the entire story,” said Terry Turney, COO of Saltgrass. “Racism of any form is intolerable, and we will always act swiftly should it occur in any of our establishments. Falsely accusing someone of racism is equaling disturbing.”

Turney said he contacted the formerly banned customer who he said could come back “to dine on us.” Which is a totally lame apology.

Quite a reversal from when Turney said the restaurant would support Khalil in a statement he gave to the Odessa American.

“We stand by and support our employee,” Mr Turney said. “Racism of any form is unacceptable and we have banned this customer from returning to our establishment.”

Apparently Turney doesn’t support fake racism, but if he had actually checked first, he would have discovered that Khalil lied.

Interested in more news from Texas? We've got you covered! See More Texas News
Previous Article HVEEM: The ICE Protest Is The Shame Of Portland
Next Article LaToya Cantrell Joins The Nutroots