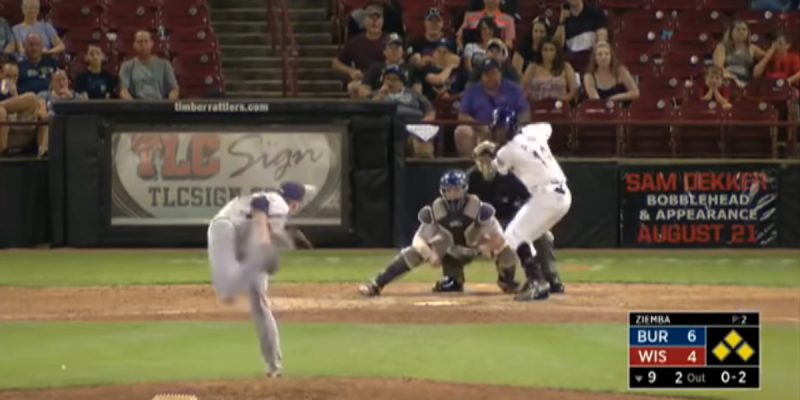 Here’s a rather improbable finale to a minor league baseball game those involved will likely never forget – and perhaps neither will you. It comes from a single-A game between the Burlington Bees and the Wisconsin Timber Rattlers, and it’s a game-winning three-run strikeout.

Say what? Yes, that’s correct. The batter strikes out on the play, which should have been the last out of the game, and three runs ended up coming in for an improbable 7-6 Wisconsin win.

Burlington was leading the game 6-4 in the bottom of the ninth and had two outs. Wisconsin had plated two runs in the inning, so the Bees were certainly leaking oil at that point, and the bases were loaded.

But with a 2-2 count, Bees lefty hurler James Ziemba uncorked a wicked sidewinding breaking ball which thoroughly fooled the Rattlers’ Nic Pierre – but after he swung and missed for the third out the ball shot off catcher Keinner Pina’s glove toward the third base dugout, which brought home Payton Henry from third. Pina raced down to grab the ball, and Ziemba didn’t cover home plate – so Pina launched a throw down to first base in an attempt to retire Pierre and end the game. The throw skittered down the right field line, which allowed Kenny Corey to race home from second, and Gabriel Garcia came all the way around from first base for the winning run just ahead of the throw into Pina from right field.

If there’s a worse defensive play in the history of baseball we haven’t seen it. Plays like this are what keeps single-A players from becoming double-A players, for certain.

Ziemba, who’s an imposing presence at 6-10 and 230 pounds (he was drafted by the Angels out of Duke in the 22nd round last year, though he never played basketball in Durham), is Burlington’s closer. He’s 3-2 with a 3.86 ERA with six saves so far this year, but control has been a problem – he’s walked 32 batters in 70 innings.

It was certainly an issue on Friday. Here’s the promised video of the fiasco…