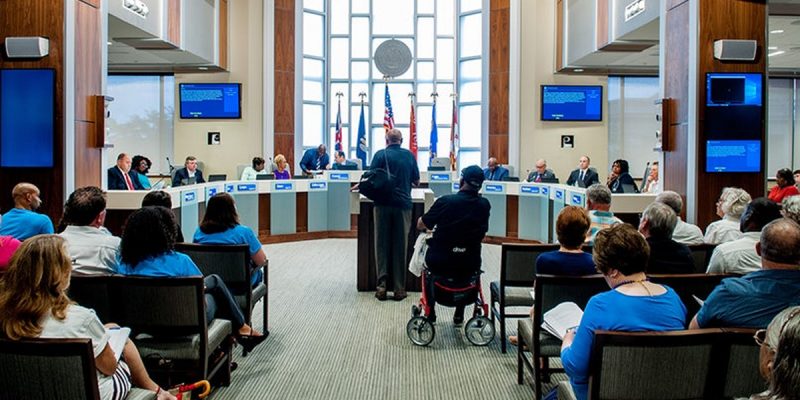 Not all of them have passed, of course, but nobody should be surprised that since the second half of Kip Holden’s first term as mayor-president of Baton Rouge there have been 18 tax increases inflicted on the people of the parish. Just since 2003, 18.

And now there will be 20 thanks to an 8-3 vote of the Metro Council last night, assuming both are successful on December’s ballot. They’re going after a big tax increase for roads the city-parish government has neglected while raising taxes to pay for less-than-needful things, and a little tax increase for a mental health facility they’ve also neglected.

East Baton Rouge voters will have the opportunity on Dec. 8 to decide on two proposed taxes: one for roads and another for mental health care.

The Metro Council on Wednesday agreed to place on the ballot proposals for a 1.5-mill property tax to build a mental health crisis center and a half-penny sales tax to pay for road improvements.

Both measures have struggled in the past. An earlier version of the mental health tax failed at the polls in 2016, and Mayor-President Sharon Weston Broome’s attempt to put a roads tax on the ballot last year failed to make it past the Metro Council.

At Wednesday’s meeting, however, parish politicians and institutions lined up to throw their support behind both measures.

The sheriff, police chief, district attorney, emergency medical services director, coroner, Capital Area Human Services director and a judge all gave their enthusiastic support for the Bridge Center, which would take in nonviolent mentally ill and addicted patients who would otherwise be sent to the emergency room or jail.

The mental health vote was closer. Cole, Collins-Lewis, Freiberg, Green, Loupe, Watson, Welch and Wicker supported sending it to the electorate. Amoroso, Hudson and Wilson voted against, and Banks abstained.

By themselves, the tax increases might well be defensible. Baton Rouge needs a mental health facility; the mentally ill in the parish invariably end up in the parish prison, where they run up a larger tab than they would in an asylum – plus, by putting somebody who’s insane in a jail you’re making things worse both for the insane person and for the ordinary prisoners, and that has implications with respect to recidivism, security and other issues. Baton Rouge needs a mental health facility.

And don’t even get us started on the pathetic quality of the roads in East Baton Rouge Parish.

Moreover, 1.5 mills is not a big tax increase. It’s $20 a year on the average house in EBR, and a total of about $5 million a year in revenue to the parish. That’s a smaller tax increase than the $8 million bump voters were duped into supporting for the criminal conspiracy that is the East Baton Rouge Council on Aging, which is nothing less than a political machine for the North Baton Rouge ruling mob to gin voter turnout with taxpayer money. We’ve covered in detail the campaign fraud the Council on Aging committed in passing that $8 million tax hike back in 2016; to date nothing has been done about it.

And despite a 7-5 Republican majority on the Baton Rouge Metro Council nothing effective has been done to claw back that money to be used on more appropriate government functions like the Bridge Center – even when the Council on Aging’s finances are still a corrupt mess.

Forcing the Council on Aging to steal fewer tax dollars could easily provide the city-parish with the $5 million to fund the Bridge Center facility without a tax increase. There doesn’t seem to be the political will on the Metro Council to defend the taxpayer in such a way.

As for the half-cent sales tax for the roads, we know how that can be justified. After all, 0.55 cents of state sales taxes came off the books when Gov. John Bel Edwards’ temporary 1-cent sales tax expired and the Louisiana legislature “only” renewed 0.45 cents of that increase. But of course the state isn’t spending any more of its massive $30 billion-plus budget on transportation infrastructure than it ever has; half that budget is poured into the yawning chasm that is the Louisiana Department of Health. So voters can be sold on the supposed fact that even with a half-cent sales tax hike they’ll still be paying “less” in sales taxes than they were last year.

That should make you feel just fine about a $48 million tax hike, right? That’s what a half-cent sales tax increase in Baton Rouge comes out to. And it’s fine, because that sales tax is going to get paid in large part by people who live in Livingston, Ascension and outlying parishes and work in Baton Rouge.

Until they don’t work in Baton Rouge anymore, because it becomes more economical for the companies at which they work to get out of East Baton Rouge Parish.

But you’ll have great roads in the parish – and less traffic on them after the jobs have departed for the suburbs just like the people did.

Naturally, even a $48 million tax bill could have been at least partially paid for by looking at haircuts to the libraries, BREC and CATS taxes. Baton Rouge obviously prioritizes those things over roads, since they’ve all got dedicated taxes making the governing authorities fat beyond measure while the city is snarled in traffic daily.

The lesson here is the political class will never suffer for its own poor priorities or slipshod, stupid management. It’s always the taxpayer who suffers for that. And when the politicians have created a jurisdiction in steep decline amid a terminal case of fiscal dysentery the way Baton Rouge is, the taxpayer usually gets outvoted – so his only recourse is to pick up and leave. Which is what taxpayers have been doing for decades, are doing now, and will do in larger numbers after these tax hikes pass in December.

At least for people in the southern part of the parish there’s the St. George petition to sign. More of them will certainly do just that as a result of that Metro Council vote.