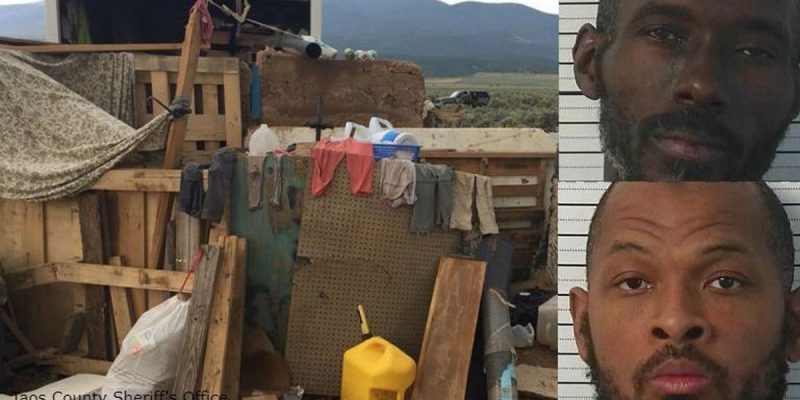 This story about the jihadist training camp uncovered in New Mexico near the Colorado border should be the biggest news story of the day, but, other than Fox News, the TV networks are either ignoring it or purposely omitting key facts in their reporting.

Late last week, a bold sheriff in Alamia, New Mexico, decided not to wait on the FBI to get out of its own way when he raided a compound in his jurisdiction, uncovering an Islamic terrorist training facility and human trafficking ring all rolled up into one…

The FBI was monitoring the site for two months but never searched it because they did not have an arrest warrant, Taos County Sheriff Jerry Hogrefe said on Monday.

On Friday, however, the sheriff’s office intercepted a message that was written either by one of the children or by one of their mothers which read: ‘We are starving and we need food and water.’

Authorities will not say how the message was delivered or who gave it to them but Sheriff Hogrefe said it meant he could not wait any longer for federal authorities to move in on the site.

How long the FBI would have waited to move on the compound is anyone’s guess, but it’s a good thing that Sheriff Hogrefe decided to move when he did.

It turns out that the compound was being used to hold women and children against their will in horrible conditions and it was also allegedly being used to train Muslim children to conduct jihadi attacks on schools here in America.

But here’s the really important part: the mastermind of this facility was none other than 39 year old Siraj Ibn Wahhaj.

Wahhaj is the son of Brooklyn, New York Imam Siraj Wahhaj, a man with a checkered past, but also one that has been coddled by US politicians for years, despite his clear ties to bad actors.

The elder Wahhaj has been quick to distance himself from his son, releasing a statement through his “Muslim Alliance of North America” (MANA):

MANA STATEMENT ON THE ARREST OF SIRAJ IBN WAHHAJ

Today news stories have surfaced reporting the arrest in New Mexico of Siraj Ibn Wahhaj – son of Imam Siraj Wahhaj, our beloved imam. The same stories cite the finding of several other adults and children, reportedly living in squalid conditions in what has been described as a “ramshackle bunker”, made from a partially buried house trailer.

Last December, Georgia police authorities issued an alert for a missing child, identified as three-year-old Abdul-Ghani Wahhaj, a grandson of Imam Siraj. The little boy was described as suffering from a medical condition from birth, requiring medication to prevent emergency treatment. In conversation with fellow officials of the Muslim Alliance in North America (MANA), imam Siraj verified this, and expressed his further concern for the physical, psychological and spiritual well-being of some of his other family members – including his son Siraj Ibn Wahhaj (the boy’s father).

Law enforcement authorities stated at that time, that no criminal charges were pending against the child’s father. Their concern was the well-being of Abdul-Ghani’s health. Today however they stated that the child is still missing, and his father has been charged with abduction.

We at MANA have no greater details at this time . Considering a police force claim that several guns were found at the scene of the arrest of Ibn Wahhaj and another man, Lucas Morten, we are grateful to Allah that no violence occurred. We credit the arresting officers for their professionalism in a sensitive operation, even as we continue to pray for Abdul-Ghani and all of the members of the Wahhaj family. We encourage all people of good will to do the same.

This statement might be somewhat believable but for Imam Wahhaj’s past, about which much has been documented. That past makes this whole New Mexico facility and affair very suspicious indeed. Here’s a brief rundown of Imam Siraj Wahhaj’s past:

Abdel-Rahman was a notorious terrorist who eventually died in prison for his role in inspiring the 1993 World Trade Center bombing.

Wahhaj had completely snowed the US government over the years and in 1991 became the first Imam to deliver the invocation at the US House of Representatives.

Wahhaj’s close ties to Jihad and Jihadists first became most clear when he was named an unindicted co-conspirator in the 1993 World Trade Center bombing:

In 1995, U.S. Attorney Mary Jo White named Wahhaj as a possible co-conspirator in the 1993 World Trade Center bombing. Soon thereafter, Wahhaj stated during one of his Al-Taqwa sermons, “I’m not frightened by no list, by no government! I thank Allah. I’m honored that they thought enough of me to put me on a list.”

Since that designation, Wahhaj’s extensive ties to known Jihadists and Jihadi organizations have been revealed, as detailed by Discover The Networks.

Wahhaj also delivered a speech at a Muslim outreach event at the 2012 Democratic National Convention.

Now we are asked to believe that Imam Siraj Wahhaj had nothing to do with his son running a terrorism training and human trafficking camp in New Mexico. Are you buying that?