On Tuesday I wrote about the issues that we legislators must face concerning a potential teacher pay raise. The below figures, based upon the latest data published by the US Census Bureau (2016), illustrates our dilemma. As can be noted, Louisiana ranks 3rd in total spending per student and in about the middle of Southern states for classroom instructional spending.

One issue that is always raised by the school boards and teachers unions is that we have a very high legacy Unfunded Accrued Liability (UAL) within our pension plans and we do. But one can see from this data that our benefit spending ranks second in the South, $926 above the southern average. The conclusion could be drawn that that $926 sum represents that UAL overage that differentiates our state from many others. Now if we were perform a mind experiment and reduce our total spending by $926, then our total spending rank would slip, but only to 5th place out of 14 southern states.

Our goal is in the legislature is to provide our children with an education that allows them to compete with children in the other states. We are failing badly in that effort. Yet the constant retort from the educational establishment is that we are not doing well because we don’t spend enough.
As can be seen, depending upon how one looks at it, our total spending rank is either 3rd or 5th. To me that tired argument that only more spending will solve our problems flies out of the window. We are spending at a rate above most other southern states, states that have similar demographics and that are generally doing much better than we are.

Does one have any wonder why there is so much skepticism among members of the legislature? That is why I wrote last week of the issues surrounding a pay raise.

Is a teacher pay raise needed? As I haven’t heard any details I am not sure. Will it redirect the course of education that we have been headed down for so many years? I seriously doubt it. 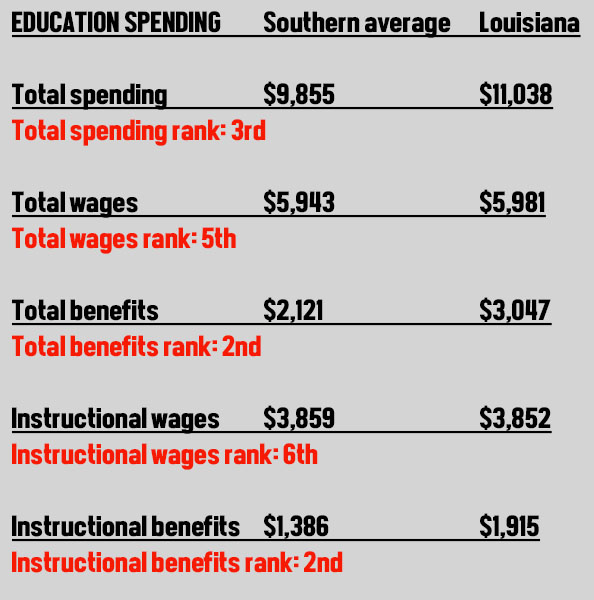