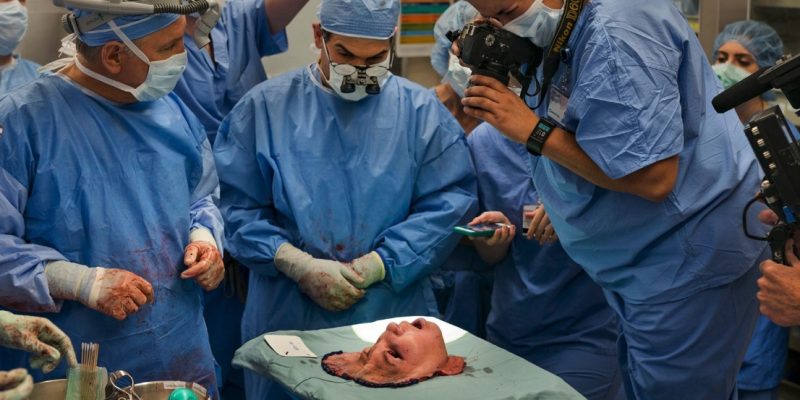 At 18, Katie Stubblefield shot herself in the face. At 21, she became the youngest person in the U.S. to undergo the still experimental surgery of having a face transplant.

The National Geographic has reported on her story for several years, following the medical breakthrough of transplanting a face. Kati’s face transplant was the third for the Cleveland Clinic and the 40th known in the world.

“It will be one of the most extensive, making her a lifelong subject in the study of this still experimental surgery,” National Geograophic writes. Of her injuries, it reports:

Brian Gastman, the first clinic doctor to see Katie, lifted her onto a gurney and wondered if she would make it. She was so tiny. Just 105 pounds. Even if she survived, he wasn’t sure she would have enough tissue for all the reconstructive work he needed to do. “It was not great,” he said. “Her brain was basically exposed, and I mean, we’re talking seizures and infections and all kinds of problems. Forget the face transplant; we’re talking about just being alive.”

In his 27 years of training and practice, Gastman said, this was one of the worst face traumas he’d ever encountered. Beyond the wound to her face, she had traumatic brain injury from the bullet’s concussive force to her frontal lobe, optic nerve, and pituitary gland. The damage to her pituitary threw her hormones and sodium levels out of whack, which can be deadly. Taking charge of Katie’s care, Gastman organized a multidisciplinary team of 15 specialists to address all her issues, from endocrinology to psychiatry.

Watch a few minutes of what would become a 31-hour surgery– transforming Katie’s face, and life.

Throughout 2014, Katie didn’t remember anything about her suicide attempt or the surgeries that followed. Her parents had to repeatedly tell her what happened. She told National Geographic, “I never thought of doing that ever before, and so on hearing about it, I just didn’t know how to handle it. I felt so guilty that I had put my family through such pain. I felt horrible.”

Her family lost everything, moved into a Ronald McDonald studio apartment, received grants and donations from family and friends, while medical clinics researched and prepared for numerous surgeries. Her story is one about a family sticking together through the worst of times, incredible doctors who diligently worked to improve Katie’s quality of life, and her’s and her family’s, second chance at a new life.

The underlying issue, is what lies beneath our faces, in our hearts and minds. Her mother’s abrupt job loss, financial stress, and a cheating boyfriend, were contributing factors that led to Katie trying to blow her brains out. Her failure to do so resulted in her face, or lack there of, helping to contribute to medical research and the rare phenomenon of face transplant surgery.

For more information about Katie, and her family, go here.