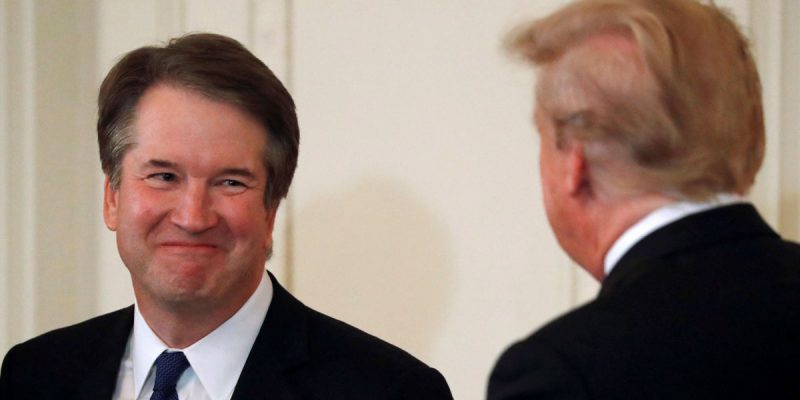 No word on whether we’ll get a sketch artist on the scene to identify the offending tallywhacker. What we do know is Ramirez, who told the New Yorker that Kavanaugh had exposed himself to her at a drunken dorm party when both were freshmen at Yale but couldn’t scare up anyone to corroborate the story, is taking a powder on testifying in front of the Senate Judiciary Committee.

According to Sen. John Kennedy (R-LA), a member of the Committee, said he spoke with Ramirez. She made it very clear that she gave her story to the press, which can be found in The New Yorker article that was posted late Sunday night, The Washington Times reported.

“Our counsel repeatedly tried to reach him,” Kennedy said. “They finally did reach him, and he said we are not issuing a statement. He said if you want our statement, read the New Yorker.”

Ramirez has a sign outside of her Boulder, Colorado home saying she will not speak to the press. Anyone member of the press who would like more information is encouraged to call her lawyer.

That has to be a bit of a disappointment to Democrats who seemed sure yesterday that Ramirez, as the second supposed Kavanaugh victim to come forward, would be key to establishing a pattern of Kavanaugh’s behavior lending corroboration to Christine Ford’s story about how he had sexually assaulted her at a high school party. The Ford allegations have been plagued by a distinct lack of backing; she named four people as having been present at the high school soiree at which Kavanaugh supposedly tried to take advantage of her, but all four have rejected the claim denying such a party had even taken place.

And now Ramirez, who was quoted in the New Yorker article as expressing doubt in her own mind as to Kavanaugh’s guilt in her alleged ordeal, won’t testify. One reason might be that to testify in front of the Senate would place her in danger of criminal prosecution should she be found to be lying – as a Democrat activist it might be worthwhile to dirty up a constitutionalist judge set for a Supreme Court appointment in the court of public opinion, but not if the potential downside involves criminal prosecution.

A third accusation of sexual misconduct involving Kavanaugh appears to be crumbling under potentially hilarious circumstances. “Creepy porn lawyer” Michael Avenatti, who earned his 15 minutes of fame representing Stormy Daniels (badly) in her hush-money allegations against President Trump, had been publicly crowing that he’d acquired a client who would “credibly” accuse Kavanaugh of engaging in gang rape in high school. That would fly directly in the face of Kavanaugh’s statement in a Fox News interview last night that he was a virgin through high school and well into his college years. One wonders how Kavanaugh would make such a statement were it not true; it’s certainly not a comfortable thing for a man to admit, and in the event it was a lie there could easily be someone coming forward to disprove it.

No one has so far taken Avenatti’s claims seriously, which is somewhat fortunate – as Avenatti earlier today expressed uncertainty that his client would go forward with a public release of her allegations and then took down his Twitter account. No sooner did that happen but the alt-right message board 4Chan contained a rather funny claim of having catfished the infamous lawyer…

In case you’re unable to see the post clearly, the text is as follows (warning: the language isn’t the most polite)…

Have stripper GF give him a call on her Burner Phone

She tells him that she is a 51 Year alumna of the private Holton-Arms School. And that Bret Kavanugh and his buddy Mark Judge ran a train on her.

Tells Him that she knows all the “Secret” codes… Find Them, Feel Them,French Them, Fuck Them, and Forget Them” –

“Devil’s Triangle” is a Three way f*ck… with a c*ck in all of her orifices … He EATS IT THE FUCK UP !

She has him call my Burner Cell phone – I’m a Classmate of Judge Kavaugh to Confirm.

In my Creepiest Deep Throat voice…I Confirm it ALL

Can Hear Avanatti wheels spinning..he’s thinking he’s broken the story of the year.

Calls GF 10 times. Wants her to tell her story on “Anderson Cooper 360” She Cries that she cannot be around Men.. He then BEGS her to to do a one on one special with Poppy Harlow. She would but her car just broke down and the rent is door she cannot miss work…Offers her 20K .. cries she cannot She’ll loser her job. 20K isn’t enough. Ups it to 75K and much more after the “Gofundme” Scam. She’ll be a national HERO

The phone doesn’t stop ringing…She tells me she is bored and scared wants to stop. OK we’ve had enough fun with this jack off

We break our burner phones

We’re hardly going to put much stock in this as a true accounting of what happened to Avenatti’s bombshell, though by the evidentiary standard Senate Democrats seem to be adhering to we’d say it’s Avenatti’s burden of proof to refute the message board claim – if for no other reason than it’s too much fun not to believe. For his part Avenatti completely denies he was catfished by 4chan. But where is his proof behind that denial?

All in all, it’s starting to appear that the momentum is finally swinging back Kavanaugh’s way as this atrocious spectacle moves forward. But that only presupposes the Democrats won’t attempt yet another last-minute smear of the judge in an effort to derail him. This morning in my American Spectator column I laid out the choice and consequences that party’s actions have presented to the country – namely, that the Democrats have become an existential threat to our political process and institutions, and without a strong voter rebuke in the midterm elections this will all get much, much worse.

But at least we can take solace in the fact the obvious lies appear to be on wobbly wheels. The Ford and Ramirez allegations don’t look very strong, and the Avenatti sludge doesn’t even appear destined for the light of day. And the Judiciary Committee now has a vote scheduled for Friday.