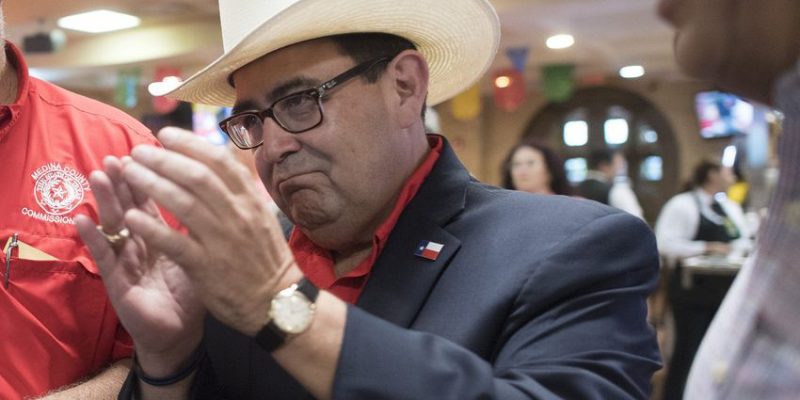 Peter Flores just won the special election for Texas Senate District, flipping the Democratic district red for the first time in 139 years. He is the first Hispanic Republican to serve in the state Senate.

With all precincts reporting, Flores beat Gallego by 6 percentage points in the race to replace convicted former state Sen. Carlos Uresti, D-San Antonio. Flores had 53 percent of the vote and Gallego 47 percent in unofficial returns, the Texas Tribune reported.

Of his victory, Flores said, “I owe this first to God and then to the grassroots in all of our counties in Senate District 19. Primarily this is an example of what happens when you have a united front and a grassroots effort. So now it’s time to go to work.”

Flores received significant GOP support and was introduced at his victory party by Lt. Gov. Dan Patrick. Patrick debunked the mainstream media’s narrative of a “blue wave” sweeping through Texas in November– arguing that Flores’ win is evidence of that.

Flores’s win now adds to the Senate GOP’s supermajority of 21 members. Under Texas law, the party that holds a supermajority (a three-fifths majority) can bring legislation to the floor without the other party’s support.

Gallego, a former congressman from Alpine, previously served more than 20 years in the Texas House. Last night’s defeat was another nail in his political coffin, following his second loss when he tried to reclaim his old U.S. House seat in 2016 and lost.

Flores will finish Uresti’s term, and will be up for reelection into 2021. Uresti resigned in June after being found guilty of 11 felonies, including fraud and money laundering, connected to his involvement with FourWinds Logistics, a now-defunct oilfield services company that defrauded investors through a Ponzi scheme.

The first round of the special election was July 31 among numerous candidates. Last nights win, Flores announced victory after having depicted Gallego in media ads as “a tax-loving liberal” and “career politician” desperate to return to power.

Interested in more news from Texas? We've got you covered! See More Texas News
Previous Article Equity Office attempts to rename streets, buildings, cities–including Austin– because of “Confederate” ties
Next Article AG Landry To JBE: You’ve Got To Back Down On The Carolyn Prator Matter