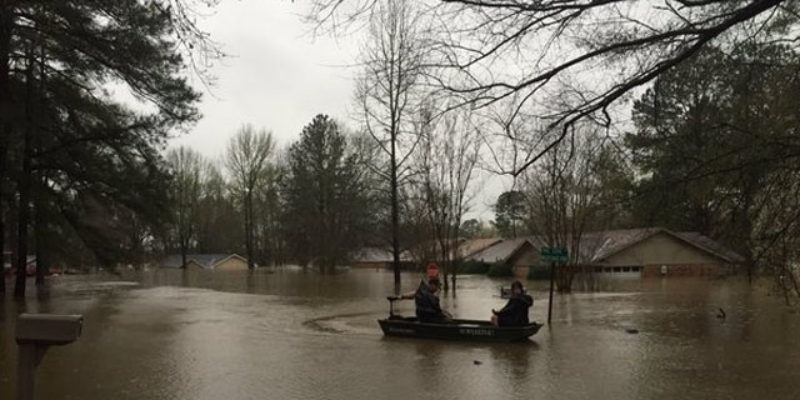 The members of Louisiana’s famous Cajun Navy are currently deployed in the Carolinas to lend a hand in rescues due to Hurricane Florence. Even before Florence made landfall this morning, members of the Cajun Navy were on hand to help residents board up residences and businesses.

But the volunteer rescuers are not getting a warm reception everywhere in the Carolinas. One town has already declined their services.

From the Weather Channel:

Louisiana’s famed Cajun Navy was in New Bern, North Carolina, Friday to help with rescues until local emergency management told them their help was not needed because all rescues would be handled by local emergency crews.

“Per a meeting with New Bern N.C. EOC, they said they will respond to ALL calls for rescue and evacuation,” the group posted to Facebook. “We are no longer in New Bern N.C. pending new area to stage and respond to calls.”

Initially, it appeared the group was told to leave, but a subsequent post clarified that the team of rescuers decided to leave New Bern because officials at the emergency operations center told them they had enough first responders to handle the situation.

“We are not standing down,” the group posted. “No order was given for us to. We cleared EOC in New Bern North Carolina and are moving down the coast.”

Perhaps in the case of New Bern, it speaks to how well they’re prepared, but it’s not that wise to turn down help. The Cajun Navy could help the city complete the rescue process sooner and free up resources that could be used in the surrounding, less prepared areas.

At least the Cajun Navy in the New Bern area has been able to redeploy to help others in need.

In the areas where the Cajun Navy has been welcomed, they have been very effective and saving lives.

The Cajun Navy came to the aid of 160 people in North Carolina Friday morning, many of whom had to be rescued from the roofs of their cars after they were stranded while trying to drive away from the devastation of Hurricane Florence.

“The tide came up really strong — five to eight feet, they’re saying — and a lot of the people did not get out … got stuck in conditions on the roads,” Todd Terrell, the founder of the Cajun Navy, told ABC News. “So a lot of people we were rescuing from the tops of their vehicles.”

It also appears the Cajun Navy model has branched out to other states. There are volunteers on the ground from many states now.

The Cajun Navy has inspired Americans to help their fellow neighbors. That makes them truly successful.