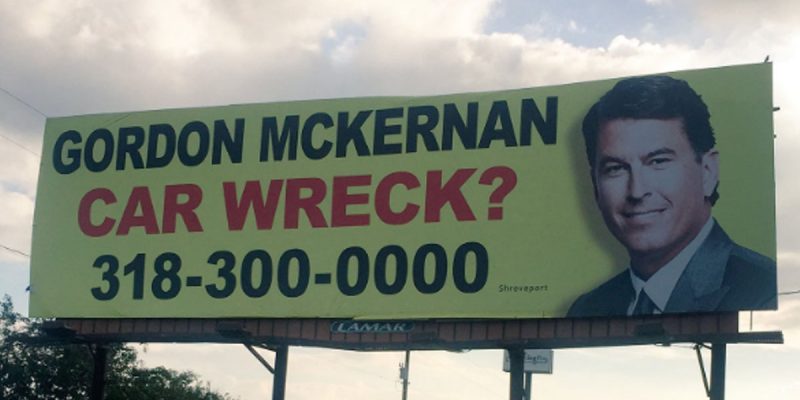 It looks like Gordon will still come ashore as a hurricane, but nobody in Louisiana appears to be under much threat of feeling effects on that level. Not only does the storm continue tracking further to the east and at this point looks like it’s headed possibly for Mobile Bay, there is also a great deal of shear on the western side of the storm owing to a pocket of dry air in the central Gulf which is draining its two western quadrants of much fuel.

So this appears to be more or less a non-event in Louisiana, minus a small bit of disturbance. And the exciting possibility of a Hurricane Gordon wiping out one or two “Get Gordon” McKernan billboards on I-10 in St. Tammany Parish appears to be waning.

Prayers for those affected to the east of us. Here’s the 7 PM forecast from the NHC.

A Tropical Storm Warning is in effect for…
* West of the Mouth of the Pearl River to the Mouth of the Mississippi River, including Lake Pontchartrain
* Alabama-Florida Border to Okaloosa-Walton County Line

A Storm Surge Warning means there is a danger of life-threatening inundation, from rising water moving inland from the coastline, in the indicated locations. For a depiction of areas at risk, please see the National Weather Service Storm Surge Watch/Warning Graphic, available at hurricanes.gov. This is a life-threatening situation. Persons located within these areas should take all necessary actions to protect life and property from rising water and the potential for other dangerous conditions. Promptly follow evacuation and other instructions from local officials.

A Storm Surge Watch means there is a possibility of life- threatening inundation, from rising water moving inland from the coastline, in the indicated locations.

A Hurricane Warning means that hurricane conditions are expected somewhere within the warning area. Preparations to protect life and property should be rushed to completion.

A Tropical Storm Warning means that tropical storm conditions are expected somewhere within the warning areas.

DISCUSSION AND OUTLOOK
———————-
At 700 PM CDT (0000 UTC), the center of Tropical Storm Gordon was located by NOAA Doppler weather radars and a NOAA Hurricane Hunter aircraft near latitude 29.7 North, longitude 87.9 West. Gordon is moving toward the northwest near 14 mph (22 km/h). A northwestward motion with some decrease in forward speed is expected over the next couple of days. On the forecast track, the center of Gordon will make landfall along the north-central Gulf Coast within the hurricane warning area this evening or tonight, and then move inland over the lower Mississippi Valley through Wednesday. A gradual turn toward the north-northwest and north is forecast to occur on Friday.

Maximum sustained winds are near 70 mph (110 km/h) with higher gusts. Gordon could still become a hurricane before landfall occurs along the north-central Gulf Coast. Rapid weakening is forecast after Gordon moves inland.

HAZARDS AFFECTING LAND
———————-
STORM SURGE: The combination of a dangerous storm surge and the tide will cause normally dry areas near the coast to be flooded by rising waters moving inland from the shoreline. The water could reach the following heights above ground somewhere in the indicated areas if the peak surge occurs at the time of high tide…

The deepest water will occur along the immediate coast near and to the east of the landfall location, where the surge will be accompanied by large waves. Surge-related flooding depends on the relative timing of the surge and the tidal cycle, and can vary greatly over short distances. For information specific to your area, please see products issued by your local National Weather Service forecast office.

RAINFALL: Gordon is expected to produce total rain accumulations of 4 to 8 inches over the western Florida Panhandle, southwest Alabama,southern and central Mississippi, northeastern Louisiana, and southern Arkansas, with isolated maximum amounts of 12 inches through late Thursday. This rainfall will cause flash flooding across portions of these areas.

WIND: Tropical storm conditions will continue to spread onshore during the next several hours within portions of the warning area, with hurricane conditions forecast by this evening in the hurricane warning area.

TORNADOES: A couple of tornadoes are possible through tonight near the coasts of Mississippi, Alabama, and the Florida Panhandle.

Interested in more news from Mississippi? We've got you covered! See More Mississippi News
Previous Article It Appears F. King Alexander Has Aroused The Ire Of LSU Alumni…
Next Article Steel Imports Are Down More Than 25% At The Port Of New Orleans From Last Year