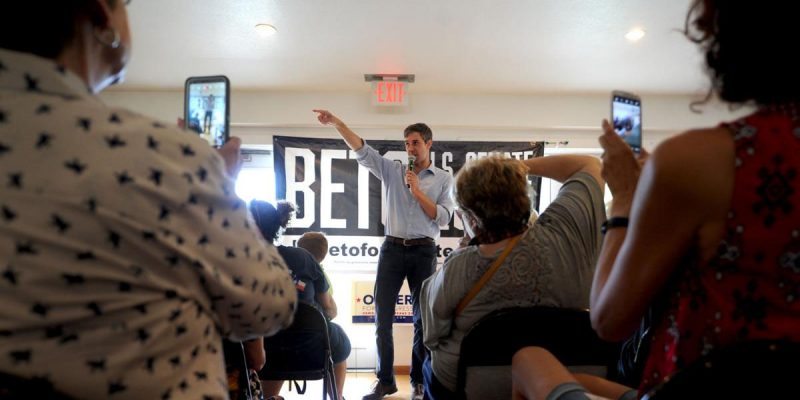 In 2008, the national news media swooned over the prospect of an African American President of the United States. The Democratic Party’s presidential nominee was freshman U.S. Senator Barack Obama (D-IL). He was lavished with kid-glove treatment by the media. There were no hard questions and no real examination of his background. He vaulted into the Oval Office on the shoulders of an adoring press. He spouted the slogan “Hope and Change” and the media, Hollywood and millions of poorly informed American voters swooned.

After ten long years, the Democratic Party has found a new Barack Obama. He is not one of the 20+ potential presidential candidates in 2020 race. Instead, he is Robert Francis “Beto” O’Rourke, a three-term U.S. congressman from El Paso, who happens to be a U.S. Senate candidate in the second most populous state in the nation, Texas.

Once again, the news media and Hollywood are in love with a liberal Democrat. Beto is the Democratic Party’s long shot hope in the Lone Star state. Liberals are mesmerized by the charismatic O’Rourke and truly believe he has a chance to wrest the coveted seat away from incumbent U.S. Senator Ted Cruz, a Republican.

While he shares the good looks and oratorical skills of Barack Obama, he is not African American or Hispanic. In fact, his family is of Irish heritage. The only “cool” thing about this candidate is that his nickname sounds Hispanic.

Beto is a typical liberal Democrat who represents El Paso, an area of Texas with a strong majority of Hispanic voters. In his three terms in Congress, Beto has not strayed from party orthodoxy and certainly does not share the same ideology of most Texas voters. Thus, it has been necessary for the media to focus on his looks and his swagger, just like Barack Obama. The media have also been working overtime to paint a picture of the liberal O’Rourke as a moderate who can appeal across racial, gender and partisan lines. The narrative is that only Beto can bring the good people of Texas together.

Hopefully, and likely, voters will examine the real Beto O’Rourke, not the media creation. As a true liberal, O’Rourke opposes the border wall and wants a pathway to citizenship for participants in the Deferred Action for Childhood Arrivals (DACA) program. He also supports Obamacare and wants to expand Medicaid in Texas. While he is a big government Democrat who advocates increased funding for the Department of Education, O’Rourke is a libertarian on the marijuana issue and wants it legalized. Finally, he has called for the impeachment of President Trump, who is popular – though perhaps not wildly so – in Texas.

Clearly, Beto’s positions can be found in the platform of Democratic Party candidates running throughout the country, including liberal states such as California and New York. While his ideology should be a deal breaker in Texas, O’Rourke has the good fortune of opposing Cruz, the U.S. Senator almost all members of the media truly loathe. Cruz is a strong conservative and does not play by the rules in the U.S. Senate. Thus, he is also hated by many members of the GOP delegation in Congress. Hopefully, Republican Party donors do not share such antipathy toward Cruz and will generously support his campaign.

It seems that the Cruz campaign has plenty of work to do. In the last quarter, O’Rourke raised $38.1 million, easily outpacing the relatively anemic $12 million haul collected by Cruz. Overall, O’Rourke has raised $61.2 million compared to only $24.9 million for Cruz. The $86 million raised in this race makes it the most expensive U.S. Senate race in U.S. history.

Democrats have not won a statewide race in Texas since 1994; however, since that time there have been significant demographic changes. The population has increased by over 10 million people and now over 28 million people live in Texas.

Many of the new arrivals are of Hispanic origin and vote Democratic. Today, there are over 11 million Hispanics living in Texas, approximately 40% of the state’s population.

This creates a challenge for the GOP in Texas. The party must solidify its base, while trying to appeal to the booming Hispanic electorate in the state. It should be easy for Cruz, since he is legitimately Hispanic. His father was born in Cuba, whereas Beto only has a Hispanic nickname.

Despite being at a financial disadvantage, Cruz is ahead in two recent polls. The latest Quinnipiac University poll showed Cruz with a 9-point advantage, while the latest NY Times poll indicated O’Rourke was behind by 8 points.

While Beto has more money and much better press coverage than Cruz, he is still losing in the polls. These results show that the voters of Texas are looking past the glitz and examining where these candidates stand on the issues. It is a good sign less than one month before this critical election.

Interested in more news from Texas? We've got you covered! See More Texas News
Previous Article RAINEY: There is No Blue Wave Coming
Next Article It’s Time For The Buckley Rule To Kick In, And Conservatives Should Get Behind Kyle Ardoin