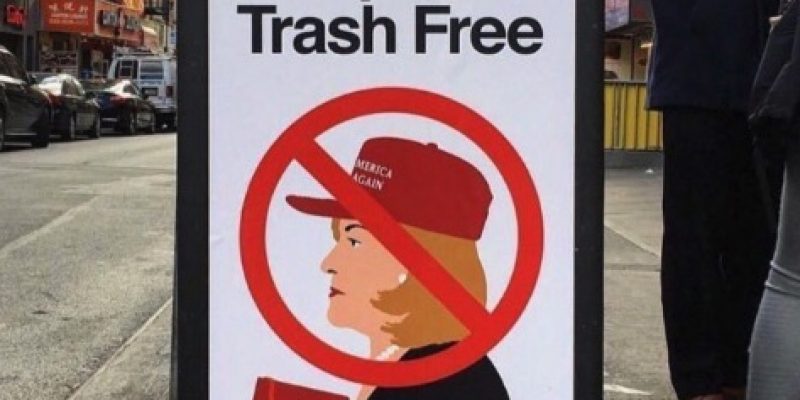 Most of the posters have been “taken down,” according to Fox News Insider, but some are still up.

Designed to look like a public service announcement, the ads include the logo of the New York City Department of Sanitation, which released a statement denying any responsibility for the fake ads.

Ads with the caption, “Keep NYC Trash Free” depict a man with a MAGA hat and a tattoo of the Confederate flag holding a Chick-fil-A cup representing a company known for its Christian values.

WOW: Hate ads are being ran in NYC that call for the removal of "trash" which depicts Christians and Trump supporters.

Some are suggesting that the ads were created by the street “artist” Winston Tseng, @WinstonTseng. But according to Tseng, he didn’t create them. Tseng told Pix 11 News:

“For the record, I didn’t create or put up these posters. But if I did, I wouldn’t want people to take them so seriously, since they’re meant to reflect certain parts of our society and not meant to generalize beyond those.

“I’d just want the audience of my fellow ‘classist elitist New Yorkers’ to hopefully be entertained by the ‘unhelpful, tone-deaf message’ as they go about their day in this trash filled liberal bubble.”

If the ads were created by a street artist who generally doesn’t make any money– who paid for them?