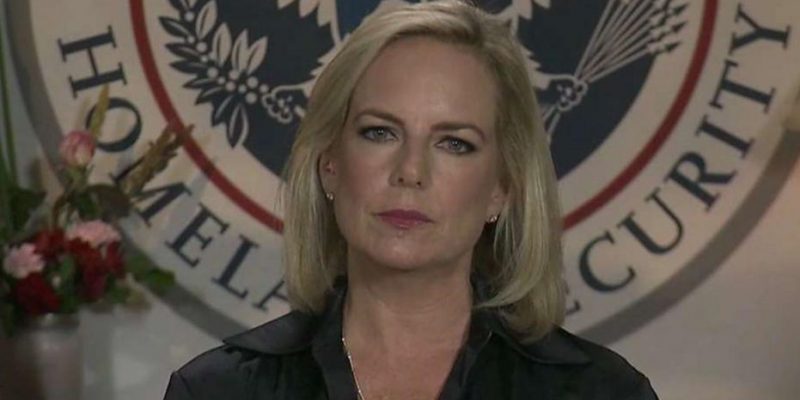 As the caravan continues to march north, and thousands threaten to force their way over the U.S. border, the Department of Homeland Security (DHS) has rejected the possibility that these migrants will cross into American territory. On “Fox News Sunday”, Homeland Security Secretary Kirstjen Nielsen made it clear that “this caravan is not getting in.”

“There is a legal way to enter this country. Those who choose to enter illegally will be stopped.” Nielsen said. Speaking to the caravan, her message was, “Do not come. You will not be allowed in. There is a right way to immigrate to the United States and this is not it.”

It has become clear that these migrants are not simply refugees. They have refused government assistance to stay in Mexico, and have broken several laws during their campaign north. This group has effectively become an invasion force of criminals.

“What we’re really talking about is the flow of people that are headed towards United States. They have chosen to break laws along the way,” Nielsen acknowledged. “You saw some of them, frankly overwhelm and burst through the border between Guatemala and the country of Mexico.”

President Trump has been equally strong in his message. It is expected that the President will hold a major immigration speech on Tuesday. It is speculated that Trump may be invoking emergency powers on the grounds of national security to prevent the invading caravan from entering the United States.

“Many Gang Members and some very bad people are mixed into the Caravan heading to our Southern Border,” Trump said in a tweet. “You will not be admitted into the United States unless you go through the legal process. This is an invasion of our Country and our Military is waiting for you!”

If Trump takes executive action, he will have claimed the authority to override the current immigration norms and prevent the encroaching caravan from entering the nation. Rhetoric has been tough from Trump and the DHS. Strong words may soon be backed up with even stronger action.