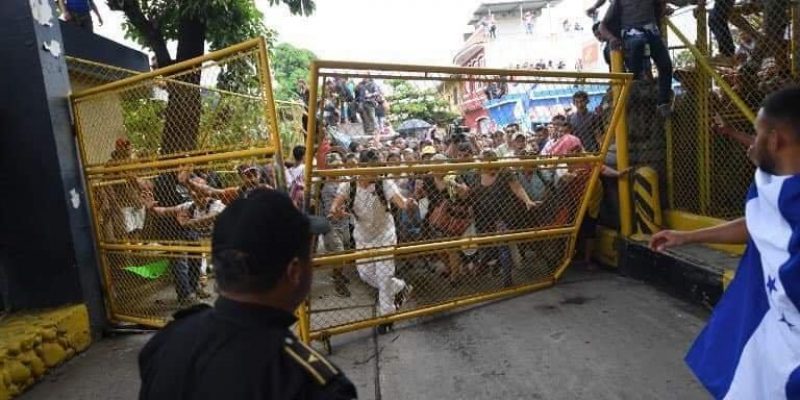 In an interview with National Public Radio (NPR) the Mexican ambassador to the U.S., Geronimo Gutierrez, said that some of the men traveling in the migrant caravan are “very violent.” The Morning Edition host, Steve Inskeep, remarked that 7,000 people were heading to the U.S. in several caravans. He asked Gutierrez how serious the situation was for the Mexican government.

Gutierrez replied, stating that it was a “humanitarian crisis” and that the Mexican government is “urging people” to enter Mexico by following its immigration laws. He also said that migrants can seek refugee status in Mexico.

“There was an effort to stop them at the border with Guatemala,” Inskeep said. “And in the end, the government more or less let them in. Is that right?”

“We have been trying to avoid, at all costs, violence in the border,” Gutierrez said. “Unfortunately, some of the people in the caravan have been very violent against authority, even though that they have offered the possibility of entering in compliance with immigration law and refugee status.”

“So police there is simply to uphold our laws,” Gutierrez said. “There is presence of the human rights commission of Mexico and also of several NGOs that can testify to the fact that the police has acted appropriately.”

“But nevertheless, we want to make sure that our laws are enforced,” Gutierrez said.

Gutierrez told NPR that the number of migrants in Mexico as of Monday was roughly 3,500.

“Out of those, we have 1,895 people that have requested – presented a request for refugee status – 1,435 of them are being processed, and about 422 have actually been repatriated to the states,” Gutierrez said, adding that some migrants “clearly intend to get to the U.S.”

“We have close cooperation with U.S. authorities to handle this in the best possible way,” he said.

Mexico’s immigration authorities issued a warning about individuals in Guatemala who are building Molotov cocktails and other makeshift incendiary devices to be used against federal police officers guarding their southern border. The alert follows an incident where a group of migrants in what’s being dubbed the second caravan threw rocks at officials at the Guatemala-Mexico Border and tried to break through international barriers. Mexican law enforcement confirmed that some of the protesters in the clash carried firearms.

The warning was issued by Mexico’s National Migration Institute (INM). The agency claimed it learned of various individuals in Tecun Uman, Guatemala, were building Molotov cocktails with the intent of using them against Mexican border authorities. In a public statement, INM asked the Guatemalan government to intervene, adding the violent actions were those of “criminals and not of a vulnerable migrant population.”

In response, the Trump administration has deployed 5,200 U.S. military members to the U.S./Mexico border. The Secretary of Homeland Security has said illegal aliens in the caravan will not be allowed into the U.S.