In 2018, average Americans may shop around for jobs like a child in a candy shop. There are so many attractive options, it is difficult to settle on just one. With such a substantial growth in job opportunities, the shopper is more likely than ever to leave the store satisfied. For there is now a record high 7.1 million job openings for Americans to chose from.

“There are 7.1 million job openings, a record high, according to the JOLTS report through August, as tracked by the Bureau of Labor Statistics,” Fox Business reports. Job openings have far surpassed the number of unemployed Americans on the job hunt, meaning there is plenty to go around. Comparatively, there are just “6.2 million unemployed Americans who are possibly on the hunt for a new job.”

Since so many employers are looking for workers, wages, benefits and working conditions are all on the rise to try and make job openings more enticing. Not every job is going to be filled as quickly as employers might like, and thus employers are having to compete with one another for same constricted labor pool.

Due to the pressure on employers to attract workers, “Pay is also on the upswing for full-time salary and wage workers. Average weekly earnings rose to $887 in the third quarter, 3.3 percent higher than a year ago, per the BLS,” Fox Business reports.

The ample amount of job openings has even surprised economists. Senior economic analyst Mark Hamrick suggests, “We knew the job market was tight. But we didn’t know that we’d break through the 7 million number on job openings.” With so many job openings,“this suggests that the unemployment rate can continue to edge lower. Wages should make further progress to the upside, despite the frustration that this has been slow and late in arriving.” 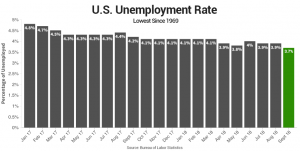