This might cause you to feel a bit of primal rage, but it’s a snapshot of where we are in America now. Let’s start with a tweet by Rep. Steve Scalise…

These vicious threats have to stop. This cannot be the new normal—there is absolutely no place for violence in our political discourse. Democratic leaders need to denounce this behavior. https://t.co/SRjDwdGval

Scalise was responding to something awful, which was that Sen. Cory Gardner (R-Colorado) was threatened with having his head chopped off…

Sen. Cory Gardner, R-Co., said Sunday that his wife, Jaime, was sent a text with a video of a beheading after Kavanaugh’s nomination was roiled by allegations of sexual misconduct. The names and addresses of some of his family members were also posted online before the judge was confirmed Saturday, Gardner said.

The video was first reported by Fox News, but a spokesman from Gardner’s Senate office confirmed the recording’s existence to the Washington Examiner and Colorado Politics.

Gardner, who chairs the National Republican Senatorial Committee, first announced his support of Kavanaugh in July. He reiterated his intention to vote for Kavanaugh on Friday after reviewing the FBI supplemental background report into whether the judge behaved inappropriately toward women. Kavanaugh has denied the accusations.

Gardner’s ordeal comes in the aftermath of a letter sent last week by the wife of Sen. Rand Paul (R-Kentucky) to New Jersey Democrat Senator Cory Booker asking that he tone down his rhetoric asking supporters to get in the faces of political opponents. Kelley Paul revealed she keeps a loaded gun in the nightstand next to her bed after a year of threats and violence directed at her husband – highlighted by his being physically assaulted by an unhinged leftist neighbor and put in the hospital with serious injuries.

I now keep a loaded gun by my bed. Our security systems have had to be expanded. I have never felt this way in my life.

In the last 18 months, our family has experienced violence and threats of violence at a horrifying level. I will never forget the morning of the shooting at the congressional baseball practice, the pure relief and gratitude that flooded me when I realized that Rand was okay.

He was not okay last November, when a violent and unstable man attacked him from behind while he was working in our yard, breaking six ribs and leaving him with lung damage and multiple bouts of pneumonia.

So when the Gardner threats arose, Scalise spoke out. And if anyone has standing to speak out against the threat of leftist violence it’s Steve Scalise, who was nearly killed by the murderous former Bernie Sanders volunteer James Hodgkinson in that June 2017 baseball practice attack and may never walk normally again after Hodgkinson’s bullet shattered Scalise’s hip and pelvis.

For his trouble, here’s what Scalise received on Twitter from someone named Martin Cizmar, who is a “Senior editor” at RawStory.com…

We’re going to be charitable and assume Cizmar is simply a blithering ignoramus who wasn’t aware Scalise was the one shot and nearly killed by Hodgkinson. The website he works for isn’t known for hiring particularly intelligent people to produce content, so maybe that’s the explanation.

On the other hand, Cizmar’s tweet is 16 hours old as of this writing and so far it’s neither been taken down nor apologized for despite dozens of responses making clear the insult it adds to Scalise’s injury. Could it be that this is such an unhinged cretin that he actually taunts a victim of left-wing political violence when that victim speaks out against it?

We don’t want to believe that. We really don’t. But if Cizmar’s tweet remains unadulterated, perhaps that’s the only conclusion the evidence can lead us to.

UPDATE: Well, now we have our answer…and it’s not a good one: 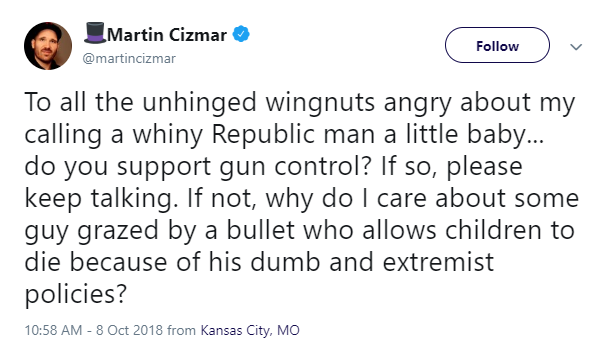 Interested in more national news? We've got you covered! See More National News
Previous Article Remember When Eric Reid Was Begging For A Job In The NFL?
Next Article Unemployment Rate Hits New Low Of 3.7% In September