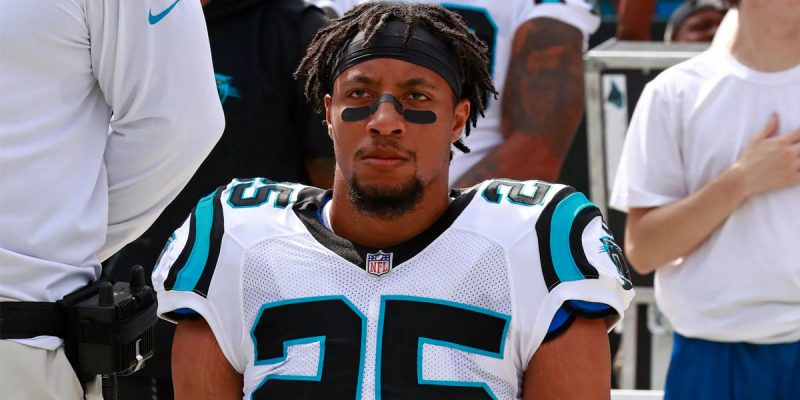 Seems so long ago when the former LSU safety, a member of an atrocious 2016 San Francisco 49ers team known more for Reid and Colin Kaepernick’s kneeling before the national anthem than anything positive they did on the field on the way to a 2-14 season that led Reid to getting dumped after his contract ended last year, promised if he got another contract he’d be through with kneeling.

Free agent safety Eric Reid said Thursday he is not planning to protest during the national anthem this upcoming season.

Reid has been among the NFL’s most visible protesters since former San Francisco teammate Colin Kaepernick decided not to stand for the national anthem in 2016.

Reid continued the protest of racial injustice and police brutality against minorities by kneeling during the anthem last season as Kaepernick was unable to find a job. But Reid said he will take a different approach in 2018.

“We understand you have to change with the times,” he said after watching his brother, Justin, take part in his Pro Day at Stanford.

“I’m not saying I’m going to stop being active because I won’t. I’m just going to consider different ways to be active, different ways to bring awareness to the issues of this country and improve on the issues happening in this country. I don’t think it will be in the form of protesting during the anthem. I say during because it’s crazy that the narrative changed to we were protesting the anthem and that wasn’t the case. I think we’re going to take a different approach to how we’re going to be active.”

Reid has gotten no contract offers more than a week into free agency despite a record of strong play on the field and versatility that many teams usually covet.

There was a reason nobody was all that fired up about signing Eric Reid. He’s bad for business. NFL fans might not have a problem with whatever political opinions Reid and Kaepernick and the rest of the spoiled millionaires on the field might have, but on Sundays they’re not interested in politics, and NFL fans have shown pretty clearly that if Reid and the others want to impose their politics on NFL fans they’ll simply stop watching.

Ergo, TV ratings are down by double digits since Kaepernick and Reid rolled out their offensive pre-game stunt. And attendance is similarly in decline. You can’t alienate your customers without suffering consequences. And since it’s the team owners who take the financial hit it’s not a surprise Reid wasn’t in demand.

But the Carolina Panthers found themselves in enough of a bind at safety that they signed Reid anyway.

And what does he do? Take a guess.

Carolina Panthers safety Eric Reid knelt during the national anthem in protest of racial and social injustice before Sunday’s game against the New York Giants.

None of Reid’s new Carolina teammates joined him or stood near him at midfield. He is the first Panthers player ever to kneel during the national anthem.

With a large American flag in the middle of the field, Reid went to his right knee as the “The Star-Spangled Banner” was sung by Marc Martel.

The 26-year-old Reid made his return to the NFL after signing with the Panthers on Sept. 27, four months after filing a grievance against the NFL alleging teams colluded against signing him during free agency after he knelt during the national anthem alongside 49ers quarterback Colin Kaepernick.

Kaepernick tweeted his support of Reid.

“My Brother @E_Reid35, with @KSTiLLS and @iThinkIsee12, continue to take a knee against systemic oppression. They are unwavering in their conviction! #ImWithReid”

Reid is on a one-year contract, and it’s a good bet he won’t be resigned when that contract ends.

He’s the only kneeler left in the NFL, as the league has done everything it could to put a stop to that bad habit.

And here was Eric Reid’s explanation for kneeling yesterday…

“I’ll put it this way: Next year will be 2019,” Reid said. “It will mark 400 years since the first slaves touched the soil in this country. That’s 400 years of systemic oppression — that’s slavery, Jim Crow, new Jim Crow, mass incarceration, you name it.

“So this has been happening since my people have gotten here. And so I just felt the need to say something about it.”