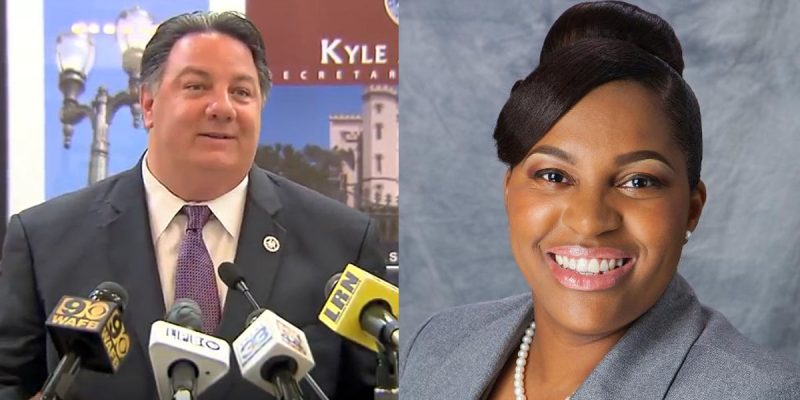 …about what happens next week at the poll which will decide the race.

And the word seems to be pretty good for a pair of candidates we at one point might have expected to be the frontrunners. Specifically, the incumbent Republican Kyle Ardoin and the Democrat Gwen Collins-Greenup, who is the only black candidate in the race.

The first poll was completed over the weekend by Trafalgar Research, who is the pollster for Heather Cloud’s campaign. It’s an internal poll, but its numbers can function more or less as an independent poll for our purposes since Cloud isn’t in position to win the race at this point. Trafalgar’s numbers are…

There’s another poll which is a true third-party survey done by an out-of-state pollster we at The Hayride have worked with in the past, and we were made privy to its numbers but other details aren’t for public release – so take this information as you see fit…

Both polls show an Ardoin vs. Collins-Greenup runoff. Some analysis on this:

First, that Collins-Greenup has gone from next to nothing to making the runoff is not a surprise. Back in September when we did the Hayride/Remington Research poll of the Secretary of State’s race we noticed that at the time Free was catching 15 percent of the black vote in the state while Collins-Greenup was catching 12, but 45 percent of it was undecided. What’s happened now that the election is upon us is that Collins-Greenup is on most of the ballots circulating in the black communities around the state. The question has always been whether Collins-Greenup would scare up enough money to pay the ballot organizations to put her on their tickets; she, or somebody friendly to her, obviously did.

Collins-Greenup’s campaign finance filings show her raising and spending less than $2,000 as of Monday – which tells us she’s getting outside help from somebody. And if, as it appears, getting on those ballots has galvanized the black community behind her and lifted her into the runoff, she’s now in a more or less identical situation to that of Derrick Edwards in the special-election Treasurer’s race last year.

The Trafalgar poll seems to be a bit of an outlier in measuring Ardoin’s support as high as it is, but everything else we’ve seen makes us pretty comfortable in saying he’s the Republican who’ll be in the runoff.

And what seems pretty clear is that Stokes, whose TV spots have been running in pretty heavy circulation for a couple of weeks, isn’t really moving the needle. All that money spent on ads and she’s still at 8 or 9 percent tells us she’s boxed in. Cloud is blocking her growth among conservative women, Free is blocking her with moderate and white Democrat women and Crowe is in her way with respect to solidifying the suburban New Orleans vote. She needed to be out ahead of the field, but her problem is that she hasn’t made enough friends around the state to earn that frontrunner status – and in a race where she’s got some inherent disadvantages, as in there’s an incumbent running and there’s a candidate the black vote is galvanizing around, so far the failure to emerge as the rising star out of the pack looks like it’s more than all the mass media can overcome.

Cloud, Crowe and Edmonds, were they one candidate rather than three, would make a strong contender: they combine for 18.7 percent, which is a strong third, in the Trafalgar poll and 19 percent, which would be in the lead, in the other survey. We’ve said for a while that too many conservatives in this race simply cancels out conservative voters, and after this race is over unless something changes it’s going to be time for a conversation about how not to make that same mistake again and again.

But these are just two polls, and we expect there will be another one to chew on before the week is out. Perhaps the next survey will confirm the tale of an Ardoin vs. Collins-Greenup runoff these two tell; perhaps not.

Interested in more national news? We've got you covered! See More National News
Previous Article CONNELL: Why We Fight – Old World Immigrants and New World Patriots
Next Article KPEL’s Third Report On The Texodus To Midland Is Out…