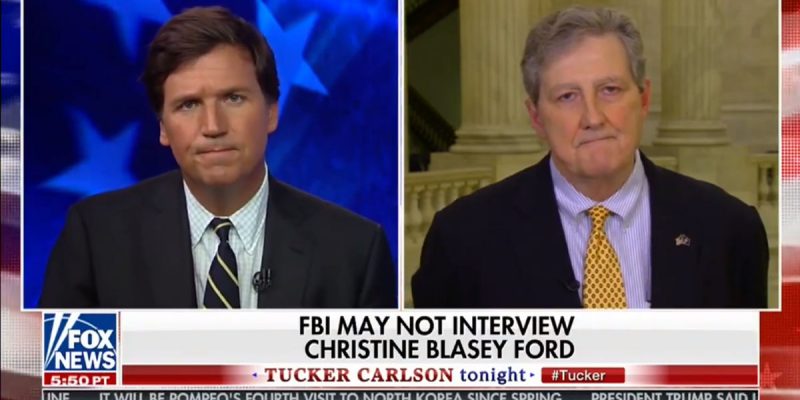 With so many controversial topics afoot and the national news cycle spinning out of control, it’s an ideal environment for U.S. Senator John Kennedy (R-Louisiana) to take to the airwaves and drop sound bite after sound bite.

That’s what Kennedy did Monday, for certain. In an interview with Fox News’ Martha McCallum, asked about the circus that the Brett Kavanaugh confirmation process has become, Kennedy laid into the Democrats’ antics by declaring, “If you think this is about the truth, put down the bong.”

“I’m going to stand by what I said two weeks ago. This is a freak show. An intergalactic freakshow. It’s a grotesque carnival. And it’s only going to get worse. And I am embarrassed for the United States Senate. We have hit bottom and started to dig,” Kennedy said.

“I don’t know. I really don’t know,” Kennedy said about Republicans having the votes to confirm Kavanaugh.

Kennedy also responded to people saying Kavanaugh doesn’t have the “demeanor” to be a Supreme Court Justice.

“It’s never going to be enough,” he said about Democrats. “And when we’re finished with the FBI investigation the Democrats will argue… he doesn’t have the demeanor. Well, they called him a rich, drunk, lying sexual predator and the man took offense to that. And they say as a result he doesn’t have the demeanor to be on the Supreme Court? They must really think the American people are stupid.”

That was enough of a hit for Tucker Carlson to ask Kennedy on for a segment last night, and the Senator didn’t disappoint – reprising his thoughts on Kavanaugh, but also discussing a bill he’s bringing which would punish a couple of Wall Street banks who made news earlier this year by announcing discriminatory policies against gun owners, sellers and manufacturers. Our Louisiana readers know those policies by Bank of America and Citigroup earned them a blackballing by the state bond commission, which barred them from bidding on finance contracts for some $600 million in Louisiana’s future bond issues, and there is an effort to expand that backlash beyond the state’s borders.

As you can see, Carlson ate it up. It will be interesting to see if Kennedy’s bill, which probably doesn’t have much chance of passage, can inspire other Southern or perhaps Western states to take up similar actions to those Louisiana has taken against those banks.

Interested in more national news? We've got you covered! See More National News
Previous Article Why you should never use Uber– especially after massive data breech cover up
Next Article VIDEO: Are You Interested In Seeing Beto O’Rourke’s Musical Highlights?