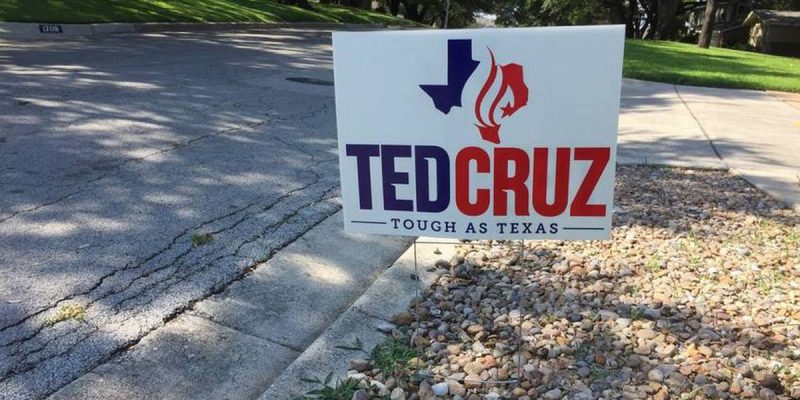 …because the yard signs would just have been vandalized by unhinged leftists.

That wasn’t what Cruz’ campaign manager Jeff Roe said at the end of August when he was asked about why O’Rourke had yard signs everywhere and Cruz didn’t, but you can bet it was a big piece of what he meant…

Cruz’s campaign manager, Jeff Roe, told the Texas Tribune this week that he has an overall aversion to campaign yard signs because they’re ineffective. He said he prefers to spend money on other advertisements, such as direct mail, door knocking, phone banks and television ads.

“It would be an easier campaign to win if we just used yard signs, and whoever wins is who puts up the most yard signs,” Jeff Roe told The Tribune.

Cruz addressed the sign disparity during a campaign event in Georgetown. In response to a question about the signs from a member of the State Republican Executive Committee, Cruz said O’Rourke’s campaign has invested a “ton of money” into “having signs everywhere,” the Tribune reported.

Democrats vandalize Republican yard signs, which means the money and effort to put them out is largely wasted. This is known.

The Cruz Campaign sent Eyewitness News pictures of signs with a black “X” spray-painted on them.

Residents say a row of houses was targeted on Briarmeade.

Some of the homeowners have already taken the signs down.

Vandalism of opposing yard signs when the opponent is a Republican is becoming something of a time-honored Democrat dirty trick in recent years, so much so that it’s now expected. Remember what happened to the Trump yard signs in 2016?

If you’re a Cruz supporter in Texas and you want to put out a yard sign, you might have to resort to the successful tactics this guy used…

If you want to go a little further, here are some ideas…

The fact is, in this day and age having a political yard sign at your home – particularly if it’s in support of a Republican candidate – is an invitation for trouble. A bumper sticker is worse. Politics is so nasty and there are so many people who have allowed their moral compasses to disintegrate that open shows of partisanship – again, particularly on the Republican side – have become infused with an element of danger.

There are more people supportive of Ted Cruz than there are of Beto O’Rourke. The yard sign wars in Texas’ cities don’t particularly show that. And the vandalism of the Cruz signs is a pretty good reason for some of it.