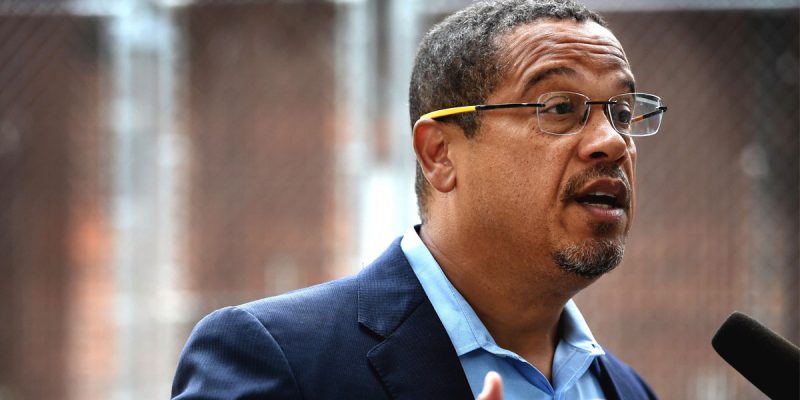 All the while that this business of Brett Kavanaugh, who all his life has been an exemplary performer in academic and professional settings with as clean a background as it’s possible to attain while gaining entry into the finest schools and professional opportunities, has persisted with some of the most disgusting, uncorroborated accusations imaginable once the Democrat Party determined him unbeatable on the merits, there has been the Keith Ellison story.

Ellison, the former Nation of Islam disciple who progressed to Saudi-style sharia Islam when he decided to “go legit” as a political figure and is now the deputy chair of the Democrat National Committee as well as a U.S. Congressman from Minnesota, has had something of a colorful love life. Put it more simply, Ellison is been credibly – and when we mean credibly, we mean with corroboration and physical evidence – accused of some fairly severe domestic violence.

And when we say fairly severe domestic violence, we mean that…

Back in August, the son of a former girlfriend of Rep. Keith Ellison alleged that the Minnesota Democrat had abused his mother in the course of that relationship.

Austin Monahan said he found a video on his mother’s computer showing that Ellison had forcefully tried to drag her off of a bed while swearing at her. Ellison denied the allegations and suggested they were politically motivated — coming just days before Minnesota’s Democratic primary for attorney general.

“Karen and I were in a long-term relationship which ended in 2016, and I still care deeply for her well-being,” Ellison said at the time. “This video does not exist because I never behaved in this way, and any characterization otherwise is false.”

Despite the fact that the story drew national attention — Ellison had become a major figure within the party when he ran unsuccessfully to be the chairman of the Democratic National Committee in 2017 — the Minnesota Democrat went on to win the primary days later. (Ellison also serves as the deputy chairman of the DNC below the man who beat him out for the top job: Tom Perez.)

CNN was in the process of reporting the story when Monahan’s son went public with the allegations. CNN has asked to view the video, but Monahan said she misplaced it when moving and provided no other evidence to corroborate her story at the time.

The story went dormant for a few weeks — although Ellison had promised to “talk more about it in the coming days.” That all changed earlier this week, when Karen Monahan began to tweet again about the allegations.

She tweeted this: “Four people, including my supervisor at the time, stated that I came to them after and shared the exact story I shared publicly, I shared multiple text between me and Keith, where I discuss the abuse with him and much more. As I said before, I knew I wouldn’t be believed.”

And this: “I expected everything that has taken place, before I decided to break my silence. I even stated it in my original statement. I showed up for myself & that was a huge piece of my healing.”

And, this: “My grand baby deserves a world where human dignity is not a political tool for your parties interest. #metoo”

This all sounds pretty bad, right? Unlike Christine Ford’s “credible” accusations, which involve the inability to place her supposed sexual assault with either a date, time or place or identify any corroborating witnesses for even so much as the identity of the individual who took her home, this one has an eyewitness account and medical records contemporary to the incident in question, along with an acknowledgement of the relationship in which the incident occurred.

So the Democrats in Minnesota hired a well-connected law firm to “investigate.” You’ll certainly be riveted to know their conclusions after having looked into the Ellison matter.

And here’s the shocking conclusion…

An ex-girlfriend’s allegation that Minnesota Rep. Keith Ellison once physically abused her could not be substantiated because she refused to provide video she said she had of the incident, an attorney hired to investigate the claims concluded in a draft report obtained Monday by The Associated Press…

A draft report obtained by the AP notes Monahan’s shifting rationale for refusing to produce the video footage, including that it was lost, was on a USB drive in storage and that it would be too embarrassing and traumatic to release it.

Ellingstad also wrote in her report that Monahan would not allow her to view the footage privately.

“An allegation standing alone is not necessarily sufficient to conclude that conduct occurred, particularly where the accusing party declines to produce supporting evidence that she herself asserts exists,” Ellingstad wrote. “She has thus repeatedly placed the existence of the video front and center to her allegations, but then has refused to disclose it…

Ellingstad is a partner at the law firm with the state Democratic party’s top attorney, Charlie Nauen. Earlier Monday, Republican Senate hopeful Karin Housley called for the attorney general’s office to investigate the allegation, saying it could provide “an impartial investigation into the serious allegations.”

And yes, Monahan needs to produce that video – which she might very well do when it’s closer to the midterm elections in which Ellison is asking the voters of Minnesota to make him their Attorney General – in order to bolster the credibility of her claim.

On the other hand, is video evidence truly necessary? We’re in the age of Christine Ford, after all, when we’re told an allegation is “credible” when it contains no evidence whatsoever, and lacks even the basic elements of a complaint like date, time and place. When there is a contemporary medical documentation of the claim, shouldn’t that at least merit a demand for more than a cynical cover-up by the state party’s stooge lawyers?

After all, if there’s no video there is at least this…

When I post this, it gets deleted every time pic.twitter.com/uAJNx8AgF5

What do we take from this? Well, the gang imploring us to #BelieveAllSurvivors sure isn’t all that interested in the Ellison controversy. Wonder why that is…