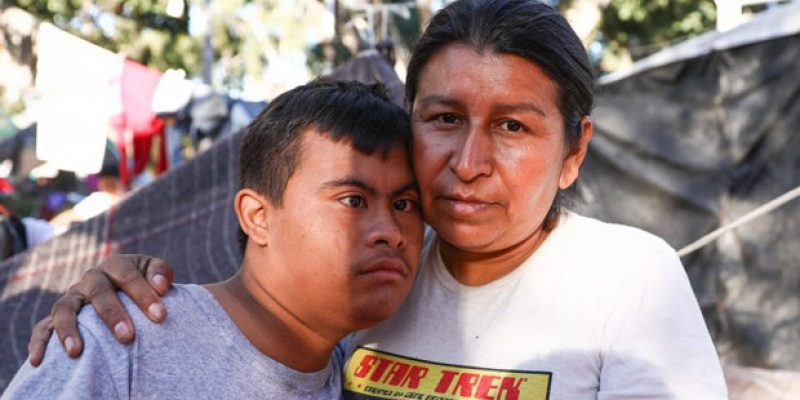 A Migrant mother from Honduras, along with her 15-year-old down-syndrome son, was one among many she says who were “forced” to join the migrant caravan and felt “pressured” to rush the fence at the southern U.S. border.

María Luisa Cáceres traveled from Honduras to the U.S. border with her son. She went to the El Chaparral border area in Tijuana, Mexico on November 25 to check the status of her asylum number (#1537) and was told she had to wait three weeks until she could apply.

Cáceres told The Epoch Times that organizers pressured her to rush the border fence. Cáceres said she didn’t want to, “but as we are with the caravan, we are forced to.”

“The truth is that we were told that if we didn’t go to the caravan, then we were not with them, and you know, since we departed from Honduras, we came in a caravan,” she said.

Cáceres said, “What I did yesterday was very risky, I wish it won’t happen again,” and blamed the aggressive men who rushed past the Mexican riot police and stormed the border. “There are people who only think about themselves, they don’t think about the mothers with kids, they think about nothing,” she said.

“It appears in some cases that the limited number of women and children in the caravan are being used by the organizers as ‘human shields’ when they confront law enforcement,” Homeland Security Secretary Nielsen wrote in a Facebook post on Nov. 26.“They are being put at risk by the caravan organizers, as we saw at the Mexico–Guatemala border. This is putting vulnerable people in harm’s way.”

The group organizing asylum entry/numbers is Pueblo Sin Fronteras (“People Without Borders”), a George Soros-linked open-borders organization that has financially organized the transportation of several caravans of Central Americans in an attempt to get them asylum in the U.S.

Another organization is the Los Angeles-based Al Otro Lado (“To the other side”), which acts as a mediator between Pueblo Sin Fronteras and the migrants. They are currently helping them learn how to answer certain “questions” asked by U.S. immigration officials about their asylum applications.

Activist Alex Mensing is one of the leading organizers of the Pueblo sin Fronteras group, acting as its spokesperson at the border. He told the Epoch Times that he is a paralegal at the University of San Francisco’s Immigration and Deportation Defense Law Clinic, who also works with CARA and is a recipient of George Soros grants.

Pueblo Sin Fronteras is a member of the National Day Laborer Network, which is affiliated with United for Justice and Peace, Caravan Against Fear and Freedom Road Socialist Organization.

Soros pledged Sept. 20, 2016, to invest up to $500 million in programs and companies benefiting migrants and refugees “fleeing life-threatening situations.”

Non-coincidentally, Pueblo Sin Fronteras said in a statement, “We will invest in startups, established companies, social impact initiatives, and businesses started by migrants and refugees. These investments are intended to be successful.”