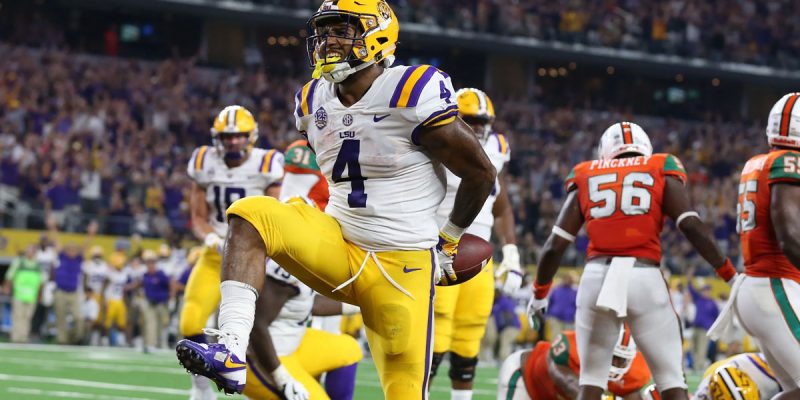 Editor’s Note: This is the third of a nine-part series surveying the LSU football program following the end of the 2018 regular season, this time assessing the adversity the Tigers faced in 2018. For Part One, click here. For Part Two, click here.

This was not a year the cards got dealt in LSU’s favor. The early-season win against Auburn notwithstanding, this team was anything but lucky this year.

Sure, Kristian Fulton regaining his eligibility before the season was a significant good break LSU received. After that, the roof caved in and LSU found itself up against worse and worse odds as the season went along.

First, K’Lavon Chaisson goes out for the season with an ACL tear in the opener against Miami. Losing Chaisson was a back-breaker for LSU’s defense – he’s the only truly alarming pass rusher the Tigers have, though Michael Divinity did have a solid season at the other outside linebacker position and could emerge as a very nice bookend opposite Chaisson next year. Without Chaisson, defensive coordinator Dave Aranda was faced with the choice of either selling out with blitzes to pressure the quarterback or selling out in coverage in the knowledge quarterbacks were simply going to have time in the pocket. That meant LSU wasn’t destined to be a truly dominant defense this year, and they weren’t – they made a living by generating turnovers, and even that got harder and harder as the season went along.

Because Chaisson wasn’t the only significant injury the Tigers suffered. Breiden Fehoko tore a bicep in the Georgia game and was lost for more or less the second half of the season. John Battle was out for the whole month of November. Todd Harris and Ed Alexander missed time. The targeting call on Devin White against Mississippi State cost him the first half of the Alabama game, which was costly. Then Fulton hurt an ankle against Arkansas, an injury which ultimately may have been a decisive factor in the A&M loss. Even Divinity was injured against A&M and couldn’t finish the game. By the end, this defense was running out of bodies as well as gas, and given the breaks handed to them by the officials in College Station, it was more than anyone could overcome.

And things were no better on offense, as the line was a MASH unit for much of the season. First there was the suspension of Ed Ingram due to a serious legal issue back home in Texas, which meant that after losing K.J. Malone to graduation and Will Clapp and Toby Weathersby to the NFL draft’s early entry LSU would be without four of five 2017 starters on the offensive line. Then came the injury to Adrian Magee in the Miami game, robbing LSU of its starting right guard. Then Saadiq Charles was injured, meaning another player with starting experience was out and with both Magee and Charles out of action LSU was stuck playing Austin Deculus and Badara Traore at the tackles, neither of whom had ever started a game of college football. Then came the injury to Garrett Brumfield, who was the fifth starter from 2017 to be unavailable. Magee, Charles and Brumfield all returned to action, but Magee never really regained his starting job and Brumfield and Charles both struggled badly after returning, prompting one to wonder if either were really close to 100 percent.

With a desperate situation like that up front, it’s really a miracle LSU’s offense was any good at all this year, and the numbers weren’t great. How could they be? The offensive line was only a slightly worse problem than the running backs, who struggled to break long runs all year even when there were holes, and the wide receivers, whose performance was below average in terms of dropped passes, route running and downfield blocking more or less the entire season.

Looking back on it, adversity like this is going to prevent any team from fulfilling championship-level goals against a schedule like LSU faced in 2018. You’ve got to be fortunate with injuries and other attrition over the course of a season if you expect to beat ranked teams week in and week out like LSU has to do, and by any objective measure the only fortune this team had was the bad kind.

Next: LSU’s preseason doubters were a lot more right than the fans are willing to accept.