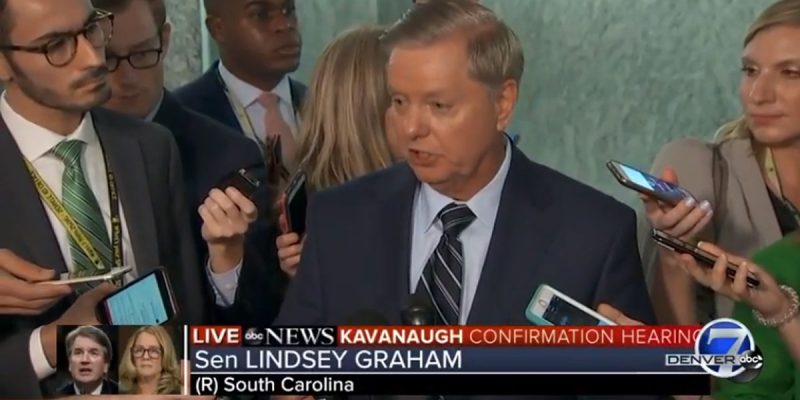 Republican Senators are quickly backing Donald Trump’s latest move against birthright citizenship. South Carolina Senator Lindsey Graham is leading the charge, recently announcing that he will introduce legislation to end birthright citizenship. Congress is out of session until after the midterms, which makes this issue a hot button topic that will sway voters one way or the other.

“Sen. Lindsey Graham (R-S.C.) on Tuesday said that he will introduce legislation to end birthright citizenship after President Trump suggested he wanted to do so through an executive order,” The Hill reports.

It is up for debate whether or not Trump can handle this situation simply via executive order. Legal scholars debate how exactly to interpret the 14th amendment. The issue will likely have to be settled in the Supreme Court. The timing from the President here has thus proven strategic. Trump waited until he had a conservative majority in the Supreme Court before making this very contentious move.

Even if the executive order route falls through, Trump has well sculpted the Republican party in his image over the last two years. Senator Graham has been one of his strongest soldiers in Congress since the Kavanaugh hearing. It thus is right in line with Graham’s recent activity to be a prominent voice on the latest issue.

“If Graham is going to propose legislation to amend the Constitution, his bill would need to win over not only two-thirds majorities in Congress, but also be ratified by three-quarters of the states,” The Hill reports. The legislative route would thus not be easy if amending the Constitution is necessary.

Having multiple options open is helpful for Republicans. The first test will be the legitimacy of the executive order. Vice President Pence has come out and recognized that this route is entirely plausible. “The Supreme Court of the United States has never ruled on whether or not the language of the 14th Amendment subject to the jurisdiction thereof applies specifically to people who are in the country illegally,” acknowledges Pence.

If this route falls through, then Senator Graham’s legislative action will be the next step.