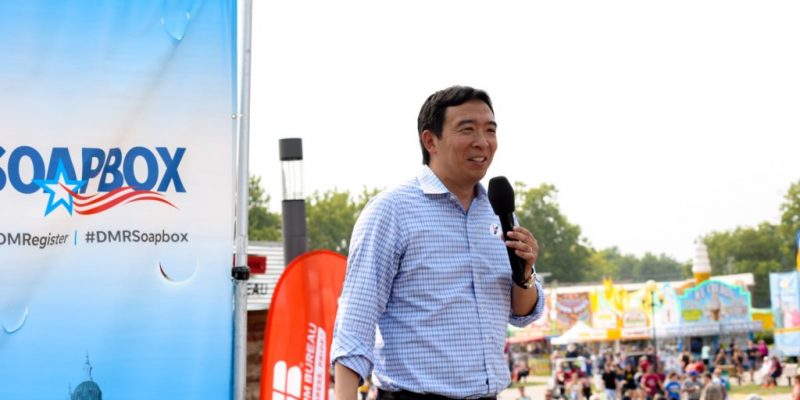 Andrew Yang, an entrepreneur and author running for President as a Democrat in 2020, wants to implement communism in the U.S. He wants to create a basic income and implement a social credit system like the one being implemented in China.

Yang proposes, for example, that people would receive a DSC for “participating in a town fair,” or “fixing a neighbor’s appliance” or “tutoring a student,” his presidential campaign website explains. The more DSCs the more perks they might get.

“As individuals rack up DSCs, they would have both a permanent balance they’ve earned over their lifetime and a current balance. They could cash the points in for experiences, purchases with participating vendors, support for causes, and transfer points to others for special occasions,” Yang states on his website. “As their permanent balance gets higher, they might qualify for various perks like throwing a pitch at a local ballgame, an audience with their local Congressperson or meeting their state’s most civic-minded athlete or celebrity.”

Make no mistake– the government is already tracking this information and streamlining surveillance won’t be to give anyone rewards. That certainly hasn’t happened in China.

Yang also proposes giving everyone in the U.S. $1000 a month no strings attached, but the catch is that taxpayers pay for this.

Basic income has been proposed by Democrats in the U.S. for years and would cost taxpayers billions if implemented, which is unlikely. Many have proposed giving everyone in the U.S. $500 per month, some $1000, and in different ways. Yang proposes $1000:

It sounds like voters should send Yang back to China. Unfortunately, he’s touring the U.S. promoting his communist agenda.