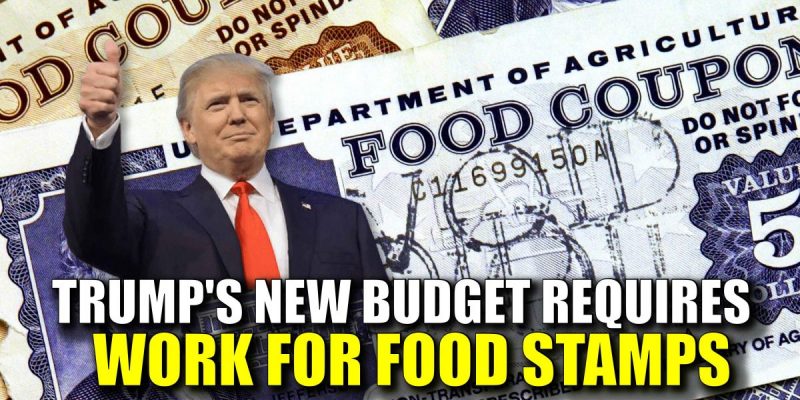 The Trump Administration plans to implement a rule change to close loopholes that states have been using to exempt large portions of healthy, younger food stamp recipients from work requirements.

The new rule changes the application process for the Supplemental Nutrition Assistance Program (SNAP), also known as food stamps, from every two years to every year, and narrows the unemployment benchmark for applicants.

Administered by the Federal Nutrition Service (FNS), a division of the U.S. Department of Agriculture (USDA), for more than 20 years, states have been allowed to submit requests to the USDA to waive the federal work requirement for able-bodied adults without dependents (ABWDs) in order to receive taxpayer-funded food stamps through geographic area waivers.

Federal law allows states to waive work requirements for areas with high unemployment rates (10 percent and above), and higher than the national rate (currently 3.7 percent). For decades, states have abused this flexibility in order to waive work requirements for as many ABWDs as possible, the Foundation for Government Accountability (FGA) claims.

“Despite record low unemployment rates nationwide, more than a third of the nation lives in an area where work requirements have been waived,” FGA states.

“The new rule reins in state abuse of waivers and other loopholes that have allowed states to avoid requiring childless, able-bodied adults to work, train, or volunteer at least part-time to receive food stamps,” FGA said in a statement.

The proposed changes could save taxpayers $15 billion every year over the next 10 years, USDA Secretary Sonny Perdue said in a statement.

“A central theme of the Trump administration has been to expand prosperity for all Americans, which includes helping people lift themselves out of pervasive poverty, Purdue said. The proposed rule, he added, “restores the dignity of work to a sizable segment of our population, which it’s also respectful of the taxpayers who fund the program.”

The FGA applauds the new rule but says that more can be done.

More loopholes still need to be closed “to prevent states from further abusing the process,” said Kristina Rasmussen, vice president of federal affairs at FGA. “The Department should be commended for asking questions and requesting comments on several areas that can be tightened further to promote work, including grouping of jurisdictions. There is now an opportunity for the administration to promote work for able-bodied adults even further.”

The 15 states with the highest percentage of residents on food stamps range from 14 to 20 percent of the population, costing taxpayers a total of more than $1.6 billion annually.

New Mexico has a greater share of people on food stamps than any other state – one in five, or 20.25 percent. The bill to feed them costs taxpayers roughly $58.58 million.

Louisianans are the second-most dependent on food stamps with the government spending about $112.61 million on more than 891,000 people, or 19.05 percent of the population.

In Washington, D.C., 18.06 percent are on food stamps costing the government $16.4 million. The CPBB reports that 26 percent receiving aid are from working families.

One News Now reports that there are more food stamp recipients than public school students in Oregon. About 17.73 percent receive them, costing the government $79 million.

In Mississippi, 17.68 percent of residents are on food stamps, carrying a cost of $61.32 million.

In Alabama, 16.31 percent of the population is on food stamps, costing taxpayers $95.45 million.

In Delaware, 15.42 percent of the population receives food stamps, costing the government $17.56 million.

According to US News, more grandparents are raising grandchildren in Oklahoma, which may or may not contribute to the 15.3 percent of the population receiving food stamps. The cost to taxpayers averages $73.11 million annually.

Even though Florida only has 15.2 percent of its population receiving food stamps, because of the sheer size of its population, 15 percent equates to 3.1 million people. More people receive food stamps in Florida than any other state, costing the government nearly $381 million annually.

In Illinois, nearly two million out of 13 million residents receive food stamps, or about 14.6 percent of the population, costing taxpayers $224.28 million.

Not having to work while also receiving food stamps, Secretary Perdue said, “is unacceptable to most Americans and belies common sense, particularly when employment opportunities are as plentiful as they currently are.”

Interested in more national news? We've got you covered! See More National News
Previous Article 2019: Record of ‘firsts’ among women elected to Congress
Next Article Can you guess which Louisiana colleges have the most student athletes?