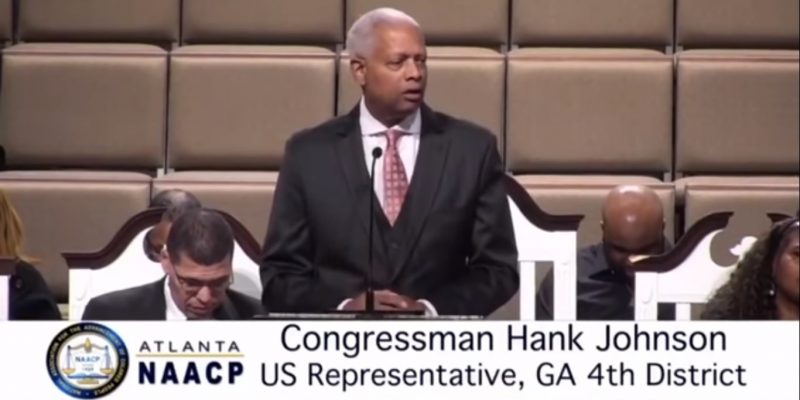 Congressman Hank Johnson (D-Georgia) slammed Donald Trump supporters claiming they are “dying early” among other things. He also compared Trump to Hitler, calling him a “racist, anti-immigrant strongman.” Johnson made the remarks at the Friendship Baptist Church in Atlanta.

“Americans elected an authoritarian, anti-immigrant racist strongman to the nation’s highest office. Donald Trump and his Make America Great Again followers who want to return America to a time when white men and white privilege were unchallenged,” said Johnson. “And where minorities and women were in their place.”

“Donald Trump supporters are older, less educated, less prosperous, and they are dying early,” Johnson continued. “Their lifespans are decreasing, and many are dying from alcoholism, drug overdoses, liver disease, or simply a broken heart caused by economic despair.”

The Daily Wire has more:

“Charismatic and a good public speaker, deceptive, and cunning, Adolf Hitler rose to power to lead Germany in 1932 after Democratic elections,” Johnson said. “He rode a wave of nationalism and anti-Semitism to power. Replace anti-Semitism with ‘all Latinos crossing our borders are rapists, drug dealers, and murderers,’ does that sound familiar?”

“Much like how Hitler took over the Nazi party, Trump has taken over the Republican party,” Johnson continued. “Hitler was accepting of violence toward the achievement of political objectives. Trump encouraged violence against protesters at his rallies, and his messaging about Charlottesville, that there were bad people on both sides, sent a powerful message of approval to the far right racists in America.”

Congressman Johnson is best known for claiming that the island of Guam would tip over because of the U.S. military presence there. At the time, there was speculation that Johnson’s Hepatitis C, which he was suffering at the time, contributed to that idiotic remark. But Johnson was cured in 2012.

Since Hepatitis C is not the likely culprit of Johnson’s latest idiocy, we just have to conclude that Johnson just isn’t very bright. Then again, Johnson’s predecessor in Congress was a left-wing moonbat, Cynthia McKenney.