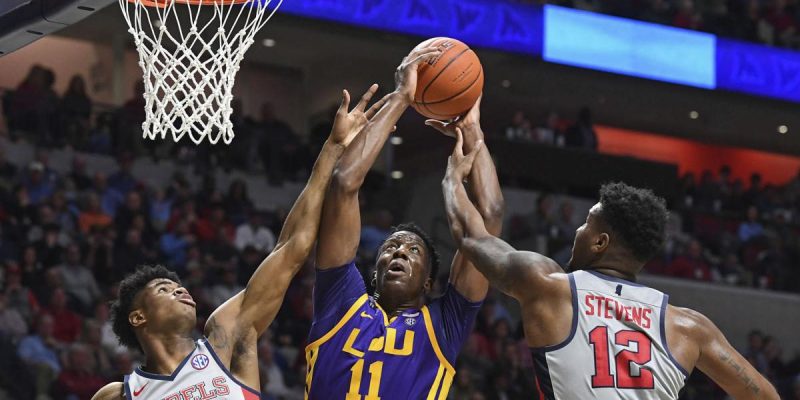 After Will Wade’s team laid a couple of eggs in Orlando – starting with an overtime loss to Florida State, then ranked No. 14 (and currently No. 11 in both polls), in which the Tigers were up by nine points with three minutes and change left in the game and found a way to let the Seminoles tie it by the end of regulation, and then an egregious blowout loss to Oklahoma State the next day – a lot of the folks who bought into the preseason hype around Wade’s LSU basketball team tended to fall away. The Tigers haven’t been ranked since, though outside of the bad AdvoCare Invitational performance over the Thanksgiving holiday LSU’s only loss was an 82-76 road loss at No. 24 Houston.

And coming into this week, despite a five-game win streak that included a win over then-No. 24 Furman, Alabama and Arkansas on the road, LSU had only 7 votes in the AP poll – good enough for just No. 39 – and in the coaches’ poll, Wade’s Tigers only garnered two votes, putting them at No. 42. For some reason, the Tigers’ resume just wasn’t all that impressive to the pollsters.

There are reasons why, perhaps. This team has clearly been a work in progress most of the season. LSU turns the ball over too much, they don’t do as good a job on the boards as they should, sometimes the chemistry isn’t quite what you’d hope, and it’s obvious that the fact there are six players of the current eight in rotation who are new to the floor for LSU affects their play.

All that said, the nation is going to have to start paying attention to Wade’s Tigers. Especially now that Tuesday night, LSU went into Oxford and beat No. 18 Ole Miss convincingly, 83-69. That, you will likely struggle to believe, is the largest margin of victory by an LSU team over a ranked opponent on the road in the history of LSU basketball. Seriously. It’s also the largest margin of victory in a non-home game against a ranked opponent since the 1980-81 LSU team beat Arkansas 72-56 in the Superdome in the NCAA Sweet 16. That team ultimately went on to become the first of two Dale Brown-coached LSU clubs to make the Final Four.

But let’s not get ahead of ourselves.

The game was tied at 31 at the half, and looked for all the world like an old-fashioned SEC slugfest. That was before LSU uncorked a 52-point second half that looked almost like a Golden State Warriors’ light-show. The SEC Network has the highlights…

It was a pretty jubilant LSU locker room, and Wade was plenty happy to take part…

So that’s an Ole Miss team which had won ten straight games, including SEC wins at Vanderbilt (81-71), at home against No. 11 Auburn (82-67) and at No. 14 Mississippi State (81-77). That’s pretty huge. LSU is now ensconced in second place in the SEC standings at 3-0, a half-game behind No. 3 Tennessee at 4-0. Right now the Voe stealsls look every bit of a No. 1 NCAA tournament seed, so the expectations when LSU hosts them at the PMAC on Feb. 23 can’t be too lofty.

On the other hand, LSU hasn’t played a ranked team yet they didn’t hold a double-digit lead on in the second half, and the only one they’ve seen at home they ran away from. That was Furman.

This team has established an identity for itself, moreover. Earlier in the season LSU was a mediocre, at best, three point shooting club. That’s no longer true. Tuesday LSU shot a blistering 9-of-19 (47.4 percent), and that follows a 10-for-25 (40 percent) night at Arkansas on Saturday and a 10-of-15 (67 percent) night at home against Alabama. They’re becoming a deadly outside shooting team, and if that torrid rate holds this will be one of the best offensive teams LSU has ever put on the floor. For the season LSU is shooting .352 at the three point line and an eye-popping .429 from the field overall, which indicates some highly proficient offensive efficiency. They turn the ball over entirely too much at 15 per game, which against 15 assists per game is not a good number, but otherwise this is an insanely good offensive team. LSU even averages more than 11 offensive rebounds per contest, a number which will win a lot of basketball games.

And individually this team is highly impressive. Wade has a dominant backcourt, with Tremont Waters, Skylar Mays and Jevonte Smart taking turns dominating games. Against Ole Miss it was Waters shaking off a poor first half to finish with 20 points, nine assists and three steals – which continued a torrid pace in recent games; Waters has averaged 17.4 points, 8.8 assists and 3.2 steals per game over the past five contests. He struggled some earlier in the season, and he wasn’t really at his best in the first half on Tuesday. But Waters is the kind of talent who can play at his best for half a game and still make the difference in a win. With Waters (13.2 ppg), Mays (13.3 ppg) and Smart (10.4 ppg), LSU has three guards in double figures to go with small forward Marlon Taylor (6.9 ppg), perhaps the team’s most athletic player and clearly its fastest-improving (in three SEC games Taylor is averaging 12.3 ppg and 5.7 rpg). That’s a dominant perimeter which none of LSU’s opponents so far has been able to match.

But the Tigers’ post play has been the key to the team’s success so far. Ole Miss was the first LSU opponent whose emphasis wasn’t down low, and LSU has at least survived if not prospered. The Tigers definitively owned the paint in the SEC opener against Alabama, as 6-11 Kavell Bigby-Williams posted a sensational 14 points, 13 rebounds, five blocks performance that night, largely quieting Alabama’s Donta Hall. And while Bigby-Williams had a poor outing Saturday against Arkansas, fouling out without a point or rebound after drawing the tough matchup with the Hogs’ future first round pick Daniel Gafford (who had 32 points in a losing effort), he bounced back nicely with a 14-point, 10-rebound, five blocked shot outing against the Rebels. He’s only averaging 6.9 points, 4.7 rebounds and 2.1 blocked shots per game, but Bigby-Williams is quickly becoming a force inside in the SEC.

And of course that leaves LSU’s marquee player, 6-10 freshman Naz Reid. Reid is something of an enigma, as he hasn’t yet established himself as a consistent force down low. But while Bigby-Williams struggled against Arkansas Reid almost single-handedly won Saturday’s game with an NBA-showcase 27-point performance which included a 10-12 field goal shooting stat and a crazy 4-for-4 from the three-point line. He hasn’t posted those numbers in the other SEC games; Reid had seven points and only one rebound against Alabama in a game he fouled out of, and Tuesday he had a decent, if not stalwart, performance with nine points, four rebounds and a pair of steals. But it’s clear Reid is settling down and giving LSU a presence down low opponents have to adjust to, and so far LSU is showcasing either Reid or Bigby-Williams down low as an alarming matchup. With 6-7 forwards Emmitt Williams and Darius Days adding quality minutes (combined, they’re averaging 15/3 points and 11.2 rebounds per game), this team has reversed last year’s problem of an inability to match up with opponents inside.

So LSU is a force in SEC play, with a 3-0 record. Going forward, what are the chances of building on that resume?

Well, the next five games on the Tigers’ schedule are as follows…

Based on what the Tigers have done so far and the reasonable projection that this team is going to continue to get better as the year goes along, none of those games look unwinnable by any stretch. Four, or even five, wins in that quintet are quite possible.

And for a team already sitting at 13-3, this is all of a sudden beginning to look like a Tiger hoops club capable of a quite high seed in the March NCAA Tournament.

Something the pollsters certainly seem to be sleeping on so far. Don’t make their mistake – these guys can play.