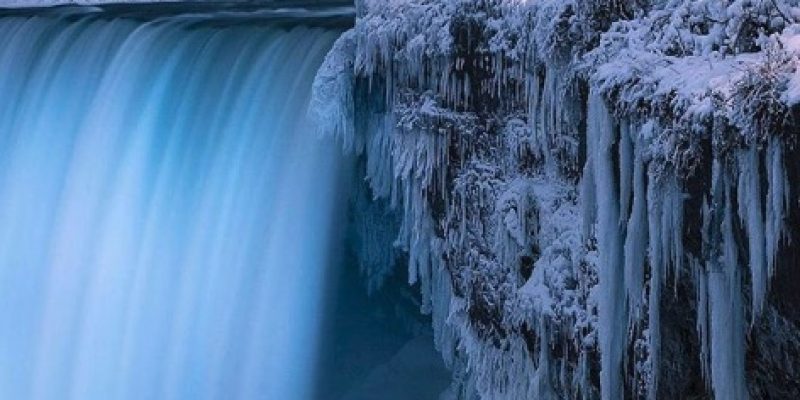 With winter storms pounding the northeast, several videos have gone viral showing a FROZEN Niagara Falls. With heavy snow, icy winds and temperatures of -20 to the region, tourists have been sharing incredible shots of the 51-meter-high waterfall on Instagram and Twitter.

In some parts, mounds of ice are as thick as 50 feet. If the winter is cold for long enough, the ice will completely stretch across the river and form what is called an “ice bridge.” The ice bridge can extend for several miles down river until it reaches the area known as the lower rapids.

Until 1912, visitors were allowed to walk on it. On February 24, 1888, the local newspaper reported that at least 20,000 people watched or tobogganed on the ice and shanties sold liquor, photographs and trinkets.

Brrr. It’s a chilly Sunday out there, Toronto. Bundle up! Photo by @arjsun #curiocitytoronto

Niagara Falls has the highest flow rate of any river in North America with a vertical drop higher than 50 meters. At peak times, six million cubic feet of water crashes over the crest of the falls every minute.

Flow is greatest over the Falls in the daytime during peak June, July, and August.

One fifth of all the fresh water in the world lies in the four Upper Great Lakes: Michigan, Huron, Superior and Erie. All the outflow empties into the Niagara River and eventually cascades over the falls. At the bottom of the falls, the water travels 15 miles over many gorges until it reaches the fifth Great Lake–Lake Ontario.