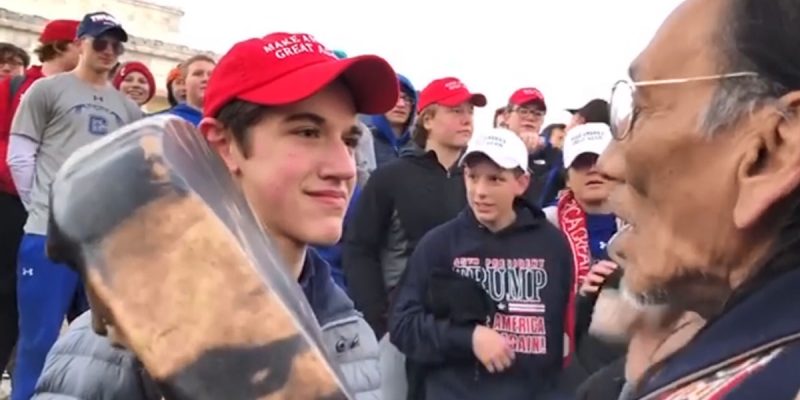 To many of the radical leftists who inhabit the interconnected worlds of the media, Hollywood and the Democratic Party, the red hat with the words “Make America Great Again” (MAGA) has become the new similar of racism. According to left wing activist and actress Alyssa Milano, wearing the MAGA hat is akin to wearing a “white hood.”

Thus, for Milano, supporting Donald Trump is the same thing as belonging to a white supremacist group like the KKK. Obviously, she has overlooked that the MAGA hat has been worn by African American conservatives and the President’s supporters like entertainer Kanye West. For a uber-progressive like Milano, it does not matter than there is nothing racially offensive in the slogan and that it was used by former Presidents Ronald Reagan and Bill Clinton. Since it is now associated with Donald Trump, the “Make America Great Again” slogan has become incredibly racist. To leftists like Milano and her Hollywood friends, President Trump is the epitome of evil.

Imagine the hysteria when unhinged leftists saw a brief clip of an incident last Friday at the pro-life rally in Washington D.C. These lunatics were triggered as MAGA hat wearing Covington Catholic high school youngsters were shown smiling, chanting and clapping. Initially, these crazies blasted the students for supposedly disrespecting a Native American activist, Nathan Phillips, who walked right up to them banging a drum. When the entire video was released, it should have been obvious to everyone that the students, such as 16-year-old Nicholas Sandmann, did nothing wrong. In fact, the focus should have been on a group of African American protesters who were yelling vile insults and profanities at the students and Phillips, who misrepresented his military service and has a criminal record.

The liberal mob was not concerned about the baggage of Phillips and treated him with kid gloves. An interview by Savannah Guthrie on NBC’s Today Show was a total embarrassment. Her toughest question to Phillips was “how are you feeling?” One day earlier she had grilled Sandmann about the expression on his face and having the audacity to wear the MAGA hat.

Over the past week, Sandmann and his classmates at Covington Catholic have been treated as criminals by countless reporters, celebrities and Twitter trolls. There was little to no concern about the damage this was inflicting on innocent children. To make matters worse, the identities of several students were exposed and the hate mongers on the left started threatening them and their families. So many death threats were made that the school had to cancel classes on Tuesday because an unsafe environment had been created for the children. Hopefully, their lawyers will file a massive lawsuit against the many celebrities and so-called journalists who defamed them.

The children were targeted because they are white, Catholic, pro-life and had the courage to wear a red MAGA hat. Even Washington Post fashion critic Robin Givhan, jump on board the MAGA hat hate train, writing that “To wear a MAGA hat is to wrap oneself in a Confederate flag.” How insane, but such commentary is what regularly appears on the pages of the Washington Post.

This type of abuse may be in store for any of the 63 million Americans who voted for Donald Trump in the 2016 election. According to Milano, Trump is cultivating “systemic racism and misogyny in this country” and “making it acceptable.” Such drivel is rampant among Hollywood stars who are constantly leaping on any controversy to attack Donald Trump.

Of course, the President can handle the criticism, but when it extends to children, it has crossed the line. They should be able to wear a MAGA hat and not be attacked. They should be able to attend a pro-life march and not be attacked. However, Milano believes that anyone who “proudly wears the red hat identifies with an ideology of white supremacy and misogyny and “gives a tacit endorsement for the hatred and the violence” of the “past few years.”

This nonsensical belief is shared by many other left-wing activists. In fact, they connect those wearing MAGA hats to the white supremacists who marched in Charlottesville, VA and the attempted mail bomber who was arrested last October.

Milano was certainly not the only celebrity who criticized the Covington Catholic High School students. Comedian Kathy Griffin channeled her Trump hatred toward these youngsters and called for their identities to be revealed. Actor Michael Rapaport even made a homophobic slur about the students. Not surprisingly, the leaders in the LGBTQ community have not come forward to condemn Rapaport.

Until at least the 2020 election, we can expect the left to continue their campaign to denounce Trump supporters and especially those who wear red MAGA hats. This should encourage the millions of Trump supporters to wear the hats as often as possible. There is nothing wrong and certainly nothing racist for people to express their support for a politician and a political movement. In fact, it is an utterly American thing to do as, thank God, we still have the First Amendment.