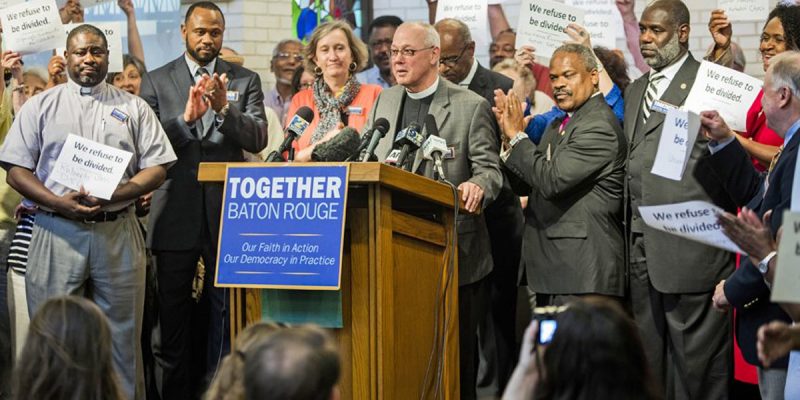 …over the last few days amid the people of Baton Rouge finally beginning to take notice of the Alinskyite socialist group’s activities and their effects.

First, there was the spectacle a week ago of Together Baton Rouge calling a press conference in advance of the Baton Rouge Metro Council meeting to do two things – first, perform a touchdown dance over ExxonMobil’s announcement earlier last week that it was pulling its applications for tax abatements under the Industrial Tax Exemption Program following a TBR-organized food fight at the East Baton Rouge School Board, and second, to commend the company for its status as the Baton Rouge area’s top charitable giver.

Together Baton Rouge gathered on the steps of city hall to address reporters before the council meeting. Leaders of the faith-based nonprofit celebrated what they called a democratic new beginning to economic development, which they expect to push aside what they called “backroom deals” that long determined industrial tax exemptions. They disagreed with Exxon officials who have said the new system is unpredictable and unfriendly to business; Together Baton Rouge said the city-parish has laid out clear benchmarks for companies, and they support ITEP proposals that meet those standards, including one that passed last year for an expansion at Exxon’s local polyolefins plant.

Together Baton Rouge on Wednesday appeared to extend something of an olive branch. Leaders said they’ve worked with Exxon in the past and commended the company’s philanthropy, such as supporting a North Baton Rouge food pantry.

“Our difference is a policy difference,” Lee Wesley said in an interview.

He commended Exxon for pulling the proposal. Wesley said the application did not comport with the city-parish’s standards, and he expected it would not pass the Metro Council, though he declined to discuss which members he expected to vote against it.

To say Wesley’s performance wasn’t the best is a bit of an understatement. Consider the optics here – you’ve won a political fight which now makes you the personification for all of Baton Rouge’s economic development problems, in an environment so charged with uncertainty and fear that on Monday of this week mayor-president Sharon Weston Broome held a pep rally aimed at showing the corporate leaders of ExxonMobil how friendly Baton Rouge is to the idea of future capital investment in town. Is it really time for a public celebration and to dance on the grave of ExxonMobil’s ITEP application?

Especially when at the same time you’re commending ExxonMobil for its charitable giving?

It’s certainly a discordant note. Particularly when Together Baton Rouge’s position opposing ExxonMobil’s tax abatement applications is that they didn’t comport with rules Together Baton Rouge helped write for ITEP applications in Baton Rouge. Technically that position is correct, except the two ITEP applications ExxonMobil pulled last week after the School Board had voted them down had been in the works well before those rules were written. What’s accurate to say about those is that ExxonMobil had made the decision to lay down investment capital at its polyolefins plant during the old days of the ITEP program when local involvement was not part of the vetting process, and continued with that course of action on assurances from the local politicians they’d be more or less grandfathered in with the new rules.

And it was the pressure applied by Together Baton Rouge which created the environment in which ExxonMobil was not grandfathered in. That’s why ExxonMobil has signaled it’s no longer pursuing capital investments at its Baton Rouge facilities at a time it has $20 billion to spend on such investments in the Gulf Coast region.

So you’re celebrating having won a fight to essentially pull the rug out from under the city-parish’s largest taxpayer, private employer and philanthropic donor after that entity just signaled they’re no longer all that excited about being any of the three going forward?

Needless to say the past few days following that press conference weren’t kind to Together Baton Rouge in terms of the community’s reaction to their exploits. Especially when a pair of Baton Rouge lawmakers, state representative Franklin Foil and state senator Bodi White, announced plans to end local involvement in ITEP decisions – something TBR railed against, which puts them squarely opposite at least half of the capital area legislative delegation on the issue which will be central to that delegation’s activities in this spring’s legislative session and in all likelihood therefore the largest issue in this fall’s statewide elections. When most of the area’s legislative races are being decided on who can most aggressively oppose Together Baton Rouge and thus promote economic growth, it’s safe to say they’ve marginalized themselves.

Which led to yesterday’s news – namely, that First United Methodist Church, perhaps the most prominent “white” church in Baton Rouge which had hitched its wagon to TBR’s train, has had enough of its membership therein.

The church’s board made the decision Monday evening to leave the organization so it could “focus fully” on the church’s mission, says Senior Pastor Rev. Brady Whitton in a prepared statement.

“The mission of the United Methodist Church is to ‘Make disciples of Jesus Christ for the transformation of the world,’” Whitton says. “The Church Council’s decision was not based on TBR’s merits or whether we agree or disagree with TBR’s position on issues in our community, but on our desire to remain focused on our mission. We support much of the work TBR has done in our community and encourage individual congregants who are so led to continue their support of and work with TBR.”

FUMC’s pullout comes after some fairly deep divisions within the church’s membership and not a small number of the parishioners signaling that they’re finding a new church to support with their Sunday attendance and donations if membership in Together Baton Rouge wasn’t halted. That’s true, we understand, of a number of the churches Together Baton Rouge’s organizers roped in when it set up shop in town several years ago, and FUMC might be the first of many to back away from what’s becoming a toxic relationship.

In a prepared statement, Together Baton Rouge Executive Committee member Rev. Lee T. Wesley compares the church’s departure from the group to an excerpt in Martin Luther King’s Letter from Birmingham Jail, in which he describes the difference between “a negative peace, which is the absence of tension, and a positive peace, which is the presence of justice.”

“A few congregations in our city will feel the tension of this moment in history more than others,” Wesley says. “My colleagues and I are praying for their clergy, as they struggle to discern which peace is the peace of Christ.”

Got that? Essentially what Wesley is saying is that the folks at First United Methodist Church, who after having had a snootful of Together Baton Rouge’s divisive political activities decided to return to religion as their first calling, are lesser Christians than he is for having made that decision.

That’s a level of arrogance which won’t put out the fire raging among those churches in the southern half of East Baton Rouge Parish that Together Baton Rouge has counted on to give its organization some patina of bipartisan cover. Don’t be surprised if more than just First United Methodist Church begins to fall away from TBR as those congregations begin pressuring their clergy to abandon this sinking socialist ship.