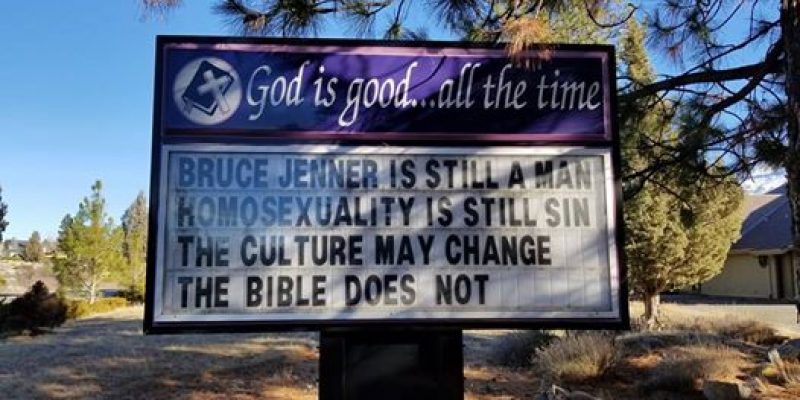 Pastor Hoke, who posted a controversial message on his church’s Trinity Bible Presbyterian sign, eventually resigned to maintain church unity after two local protests arose outside of his church.

“Bruce Jenner is still a man. Homosexuality is still a sin. The culture may change. The Bible does not.”

Hoke told the Daily Wire he created the sign after watching a video of a biological male (who identifies as female) who “threw a fit because a clerk had accidentally referred to him with the masculine gender [pronoun].”

Hoke says because “the culture has drawn a line in the sand and dared [Christians] to step over,” he said the church should accept the challenge — not with hate, but by simply preaching “the gospel.”

According to SFGate, “a couple dozen” community members gathered to protest the sign on January 6. The protest, called the “Shastina Love Rally,” was organized in part by local resident Amelia Mallory. This protest was followed by a second organized protest.

In a pinned post on the official Love Rally Facebook page, a message from Mallory reads in part:

We are there to support the LGBTQ+ community in a positive way. Debating with any church members isn’t the goal. We are not there for them. Some of us on our side of the street still are also religious. All of us are capable of treating everyone with respect, even if we disagree. Do not engage anyone trying to escalate the situation to violence.

On or around January 9, the church’s sign was vandalized.

Pastor Hoke told Yahoo! Lifestyle, “We believe that Jesus commands all Christians to let their light shine. We also believe that salvation is only for sinners. Jesus said he came to call sinners, not the righteous. If we give in to cultural demands to stop calling sin ‘sin,’ then we are robbing people of opportunity to hear the truth.”

He said he resigned because the church “faced a potential fracture in the wake of the fervor surrounding the sign” and he wanted to keep the church intact because he “loves” the people at Trinity Bible Presbyterian.

As of today, I am no longer the pastor of Trinity Bible Presbyterian Church.

After much prayer and counsel, I have decided that it is best to briefly communicate what has taken place.

1. I was informed by our other elder that he felt he could no longer follow my lead as Pastor of TBPC.

2. I was informed that essentially all but one couple in membership would leave the church if I continued as pastor of TBPC.

3. Our other elder and the couple felt that those who left would likely return if I would leave.

4. Our other elder was agreeable to stay and assume the pastoral responsibilities.

Therefore it was determined that it would be in the best interest of the local body for us (TBPC and the Hoke family) to part ways.

Hundreds of people have commented, a majority of whom support Hoke:

“I am sorry the church doesn’t support your stance. God bless you for being faithful to the Word of God, and not the ungodly secular culture.”

“Brother, I am speechless but not surprised. You preach the true Gospel of Jesus Christ and that is hard to handle for most. I am praying for you and the family right now. God bless you and keep you.”

Hoke said of the protesters, “I believe they’re sincere — sincerely wrong, but sincere. I believe that it is hypocritical that their position is taught in schools and pushed on children, while our position is asked to be kept within the walls of the church.” He added that he hopes and believes that “within their midst, there are people whose names are written in the Lamb’s book of life, and that the command for all Christians is to preach to them the gospel faithfully, calling them to repentance and faith, that they might be changed by the Holy Spirit and brought into the family of God.”