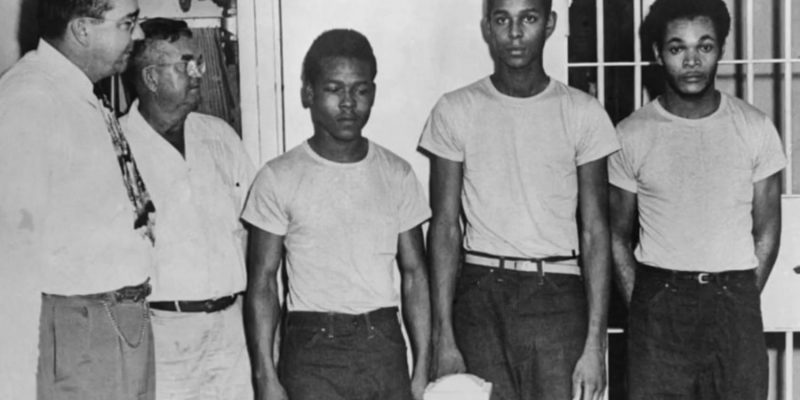 Gov. Ron DeSantis and three Cabinet members unanimously granting posthumous pardons to four black men whose lives were destroyed after being wrongfully accused of raping a white woman on a road near Groveland, 30 miles west of Orlando, nearly 70 years ago.

On Friday, the pardons were approved for Earnest Thomas, Charles Greenlee, Samuel Shepherd and Walter Irvin, who Padgett Upshaw said attacked her and her husband on July 16, 1949.

Their alleged victim and accuser, Norma Padgett Upshaw, spoke publicly before the pardons were granted, maintaining that the four men, known as the “Groveland Four,” were guilty. She told the governor:

“I’m the victim of that night. I tell you now, that it’s been on my mind for 70 years. I was 17 years old and it’s never left my mind. I’m begging y’all not to give the pardons because they did it. If you do, you’re going to be just like them.”

But well-documented evidence from ensuing investigations and court proceedings show that the men were innocent, and what happened to them left a terrible mark on Floridian “justice.”

“You’d like to think that in America, no matter what passions or prejudices may be on the outside of a courtroom, that when you actually get in that courtroom, it’s the law applied to the facts without passions or prejudices that will decide your fate. And I don’t know that there is any way you could look at this case and think that those ideals of justice were satisfied. Indeed, they were perverted time and time again.”

DeSantis called the convictions a “miscarriage of justice.” The “only appropriate thing to do is to grant pardons,” he said.

The Cabinet agreed and made the pardons official.

In 1949, one day after Norma Padgett Upshaw accused the men, 16-year-old Greenlee, Shepherd and Irvin were jailed. Thomas fled Lake County and avoided arrest before being hunted down 200 miles away by a 1,000-man posse and shot more than 400 times.

The three in custody were beaten to coerce the confessions and were convicted by an all-white jury. Greenlee, 16, was sentenced to life. Shepherd and Irvin, U.S. Army veterans, were sentenced to death.

Thurgood Marshall, who would become the Supreme Court’s first African-American justice, spearheaded the NAACP’s legal team in the appeal, which the U.S. Supreme Court upheld in 1951, ordering new trials for Shepherd and Irvin. On Christmas Eve of that year, Moore and his wife were murdered when their home was firebombed.

Only Irvin made it to the second trial. McCall, claiming his handcuffed prisoners tried to escape while he was transporting them to a hearing for their re-trial, fatally shot Shepherd and wounded Irvin, who later testified he was shot in cold blood while playing dead.

Despite Marshall representing him, Irvin was convicted by an all-white jury and re-sentenced to death. Gov. Leroy Collins later commuted Irvin’s sentence to life in prison. He was paroled in 1968 and died one year later. Greenlee was released from prison in the early 1960s and died in 2012.

The plight of the “Groveland Four” gained national prominence in 2012 when author Gilbert King examined the case in his Pulitzer Prize-winning book, “Devil in the Grove: Thurgood Marshall, the Groveland Boys, and the Dawn of a New America.”

The city of Groveland and Lake County commissioners issued formal apologies in 2016. All four men were exonerated in an April 2017 resolution by both chambers of the Florida Legislature.

Gov. Rick Scott never considered pardoning the four during his eight years in office. Pardoning them was a 2018 campaign pledge made by DeSantis.  Senate Democratic Leader Audrey Gibson, D-Jacksonville, said, “A great injustice has finally been corrected. It is my hope that this pardon brings some solace to the families of these four men, and helps heal the wounds that have lingered for far too long.”

Caption of feature image:Image courtesy of State Archives and Library of Florida. “Lake County Sheriff Willis McCall (far left) and an unidentified man stand next to Walter Irvin, Samuel Shepherd and Charles Greenlee in Florida in 1949. The men, along with Ernest Thomas, came to be known as the Groveland Four.”