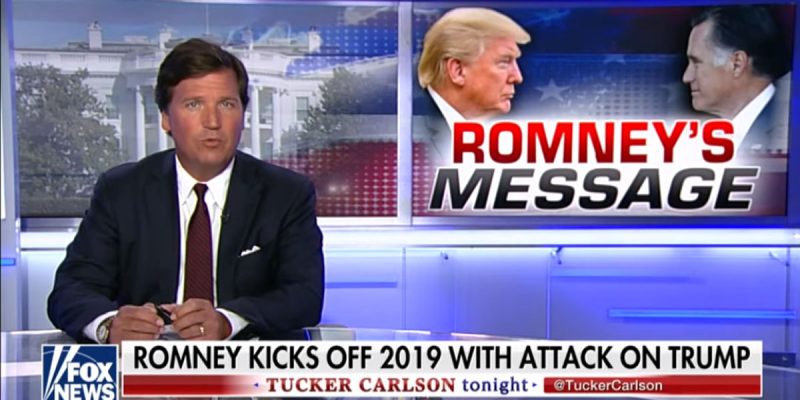 In a couple of ways here. We like using an expansive definition of “social justice,” because to us that ought to include poetic justice. Given that “social justice” is a made-up term assigning the word “justice” to every tawdry identity-group grievance the Left can cook up – for example, decrying “white privilege” as it affects a generation of caucasians who have been legally discriminated against all their lives under the rubric of affirmative action, or demanding that sane people ignore the obvious physical and other differences between males and females – then why not call it “social justice” when the world gives someone their just desserts for their own behavior?

And under that definition that’s what Romney got for his Washington Post screed assailing President Trump’s character on New Year’s Day.

Romney’s sanctimonious bloviating about how America must have a president of high character, which Trump is most certainly not, came off as a naked attempt to burnish his image as a presidential primary challenger to Trump in 2020 – something he quickly denied yesterday. Which begs the question why the junior-senator-to-be from Utah bothered to trash Trump before even taking office in the Senate, and more strikingly why he would do it in the pages of the Washington Post. After all, Romney’s job is to represent a constituency now, not to play talking head in the papers and on TV in Washington, and beating up the president certainly won’t facilitate roadbuilding or mine cleanups back home.

Guess he didn’t think about that. Or maybe he didn’t give a damn.

Not to mention how tawdry it appears that Romney didn’t have anything negative to say about Trump back in October, when he was standing for election. He kept quiet then. He also kept quiet about Trump’s poor character and boorish behavior when Romney collected the president’s endorsement – something he likely could have gone without and still won in a heavily Republican state.

Sure, Trump is not above criticism. In case you haven’t noticed, he’s getting lots of it from the other side – and a good deal of that comes from people who have ZERO room to talk about character. But for some reason there is a class of Republicans, and they’re mostly the same people who have found ways to lose nearly unlosable elections for half a century, who simply cannot resist the temptation to micturate inside the tent.

Romney was easy to mark as one. He fits all the key definitions – multiple-time electoral loser, out-of-touch elitist lacking the common touch, politically stiff, sanctimonious, desperate to seek the approval of Democrats in high social positions and completely naive about the nature of politics. The Republican Party has been plagued with this type for decades; Romney’s father was one if you’ll remember. And every time they’re in charge of the party they do it damage.

Notice that he’s also attacking Romney from what comes off as almost a left-wing economic perspective, though Carlson does explain it. Social justice everywhere, right?

There’s a lot in here after Carlson shreds Romney as one of the ruling-class self-dealers which is well worth a debate – namely, that Carlson divorces himself and the part of the conservative movement he influences from the orthodoxy which has put the free market at the forefront of everything, and we’re not sure he’s right about that. After all, our experience is that having the government involved in promoting healthy families, rather than having the cultural elite in charge of that project, simply doesn’t work. We’re not sure the answer is to raise taxes on capital to balance the inequity between tax rates on it and on labor is an improvement – you’ve got to lower taxes on labor if you want to do that and preserve the opportunity for people to get ahead.

But it is encouraging to see Carlson, as Mollie Hemingway also did yesterday, emphasize the cultural piece in assessing the country’s true challenges. And one reason why Romney is so poorly poised to make a positive contribution to this debate is the fact he’s a cultural outlier who had to run away from him own background when he offered himself for president in 2012.

Not that there’s anything disqualifying about being a Mormon; most of us who know Mormons are pretty impressed with the discipline and dignity and success Mormons seem to commonly achieve, and they seem to do a pretty good job holding families together – which might be the single largest differentiator between success and failure in this country, on balance.

But that said, Mormons aren’t cool in today’s culture and Mitt Romney absolutely was not going to change that – nor was he even going to try. It was fairly obvious that the Democrats cooked up the “War On Women” narrative in 2012 as a thinly-veiled slur on Romney’s religious background, seeing as though the Church of Latter-Day Saints is a fairly heavily patriarchal entity and Democrats’ bigotry against organized religion lies just under the surface. They had to find a way to scare women voters into choosing four more years of Obama’s national mismanagement and painting Romney as a misogynistic Simon LeGree in a Brooks Brothers suit was their vehicle for that. It only worked because Romney was so stiff, and because he’s a Mormon. Interestingly it didn’t really work on Trump four years later because in today’s stupid culture Trump’s serial inappropriate behavior with women makes him look more like he loves and understands them more than the straight-laced Romney does.

Romney’s religious faith is the subject of one of the most popular plays on Broadway, and The Book Of Mormon, while containing a good deal of humor, is quite possibly the most vicious bit of religious bigotry extant on the planet. Consider what would happen if that play was about the Koran instead, and you’ll understand our meaning. And yet nobody complains. Romney, who holds himself out as the nation’s most prominent Mormon political figure, never complained.

Nor does Romney complain about Nancy Pelosi or Chuck Schumer. He certainly didn’t complain about them and the divisive, toxic effect their machinations have on American politics in his op-ed at the Post. Instead, he takes pot-shots at Trump.

What that comes off as is Mitt Romney attempting to replace John McCain as the East Coast Democrat elite’s pet Republican senator. He’s their newest character from The Book Of Mormon, and he’s happy to play that role for free.

We can have a debate about Trump’s boorishness and the mistakes he makes. We can also have a debate about whether Carlson is correct that capitalism needs guardrails imposed by the Right. Those aren’t topics out of bounds for discussion. But right now it’s the Left which has grievously wounded American culture and politics. Not Trump. And if you’re more interested in internecine warfare than routing the Schumers, Pelosis, Bernie Sanderses and Alexandria Ocasio-Cortezes of the world, you are of zero use.

And that’s where Romney is. Any time Carlson wants to hammer him on TV is fine with us until Mitt learns not to do damage.