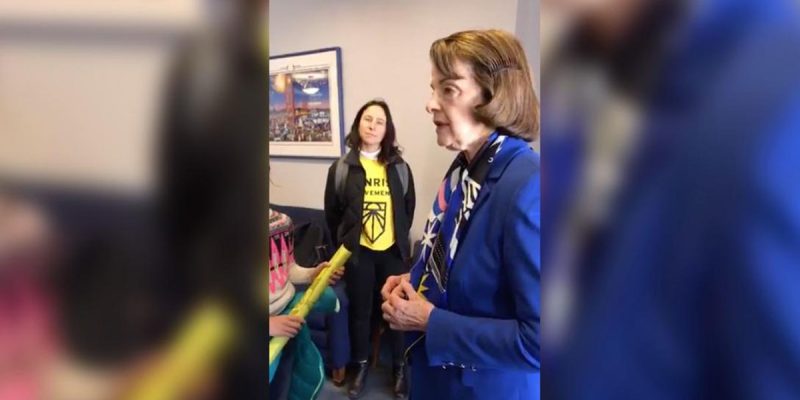 In a testament to the hollowness of Democrat ideology, Senator Diane Feinstein was confronted in her office this week by a group of very young children. These kids were there in vociferous support of the Green New Deal and they hounded the Senator as she tried to explain the reality of our political world. Did I say these were very young kids?

The liberal Senator grew visibly agitated over the regurgitation of far left propaganda by the children as she tried to explain that their ideas were not realistic and were never going to happen. Predictably the internet was filled with liberal outrage, but it was not targeted at the immorality of obvious brain washing of these children by their parents. Instead the left assaulted Senator Feinstein for her reaction to their absurd demands. Even as this event portends a frightening specter of one potential future for America, the irony is that the left is now literally eating their own.

For decades we have been warned that our schools and universities were being taken over by far-left educators and administrators who were embarked on a covert mission to convert young minds to their philosophy. Most average Americans ignored this message, allotting it to the category of just one more conspiracy theory. But even as educators were indoctrinating young people with their uber-liberal philosophy, the mass media was abusing the people’s trust by amplifying the same leftist message as it used identity politics and divisiveness in order to denigrated the fundamental underpinnings of American culture. No, Senator Feinstein’s agony illustrates that this was not a conspiracy theory, but in fact it has been a slowly growing vector in the body politic that has blossomed into a fully-fledged infection.

Suddenly the principles of Karl Marx, which through history always had been an anathema to Americans, have become mainstream themes in the extant Democrat Party. Today’s most venerated Democrat standard-bearer is not one of the long suffering “progressive” Democrats, instead it is a previously unknown first-term Congresswoman who panders to the growing Marxist elements of the Democrat Party and claims for herself a leadership position. The media, in concert with its self-appointed role as promoter of the Left, plays its part by assuring that a positive version of her image is prominently displayed all over America. All the while, to the chagrin of old-line Democrats, the media grants her a credibility that she doesn’t possibly deserve.

Polls tell the tale. Democrats, especially Millennial Democrats, are embracing socialism in ever-growing numbers. How paradoxical that these young people come from the most prosperous generation in history, in a world were poverty has been lowered to unheard of levels. All of which is the outcome of capitalist freedom. Yet these young people are conditioned through their education and the media to believe that America is an unfair nation and that they are facing an uncertain future. They are so indoctrinated that they are willing to abandon all for the sake of a socialist dream state.

So why are young people attacking old-line Progressive Democrat leaders? As Democrat politicians increasingly see that the popularity of neo-socialism offering a path to their own political power, they are releasing from the bottle the genie of years of a false vision that has been built up in young minds. But genies cannot be put back in the bottle and Democrat politicians have in effect sown the seeds of their own destruction as leaders of their Party as they lurch toward philosophical chaos.

Senator Feinstein, for one, now understands that she and her peers are reaping the Marxist whirlwind that they unleashed on America. Children, filled not with visions of childhood fun but indoctrinated with socialist dribble, are rejecting her leadership. After a lifetime in the liberal trenches Senator Feinstein now knows that her authority as a leader has been usurped by a 29 year-old socialist Congresswoman. Major contenders for the highest office in the land, as they try to out-maneuver their rivals by offering more and more radical Marxist goodies. are rejecting what Senator Feinstein’s generation viewed as “progressivism” in favor of full blown socialism.

But the nation as a whole hasn’t yet taken the socialist bait. On the assumption that our nation survives the current socialist upheaval I believe that we will find, just as with my Baby Boomer generation, the generation of the revolution and free love, that this current generation too will come to realize that nothing is free and that all the phony socialist ideals fade rapidly in light of real world obligations such as family and career. As this generation slowly ages they will come to understanding that only a free capitalist society offers them the opportunities for our people to prosper through self worth and ingenuity. They too, like my generation has, will reject all of the neo-Marxism that today they so revel in.

An expression attributed to Winston Churchill, but that actually goes back to the 18th century, is so telling;

But I will confess, as we wait for time to work its wonders on the Millennial generation’s logic I will gloat a bit as I watch Democrat hypocrites like Senator Feinstein struggle to hang onto political control in a time of a socialist tsunami that they tried to harness to their own benefit. In fact, unless today’s Democrats find a way to disengage from their folly over the abandonment of America’s fundamental beliefs, we will see the growing fragmentation of their Party and we may even see its demise in a cataclysm along its ideological rifts.

Interested in more national news? We've got you covered! See More National News
Previous Article CROUERE: Our National Debt Is Our National Disgrace
Next Article The Bloodbath In Venezuela Is Beginning, And Our Involvement Is Inevitable…