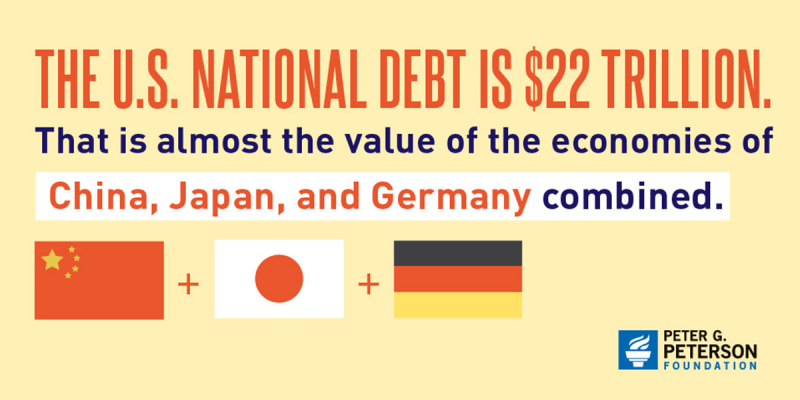 In mid-February, our national debt reached $22 trillion, a new record for our country. Since President Trump took office in January of 2017, our debt has increased over $2 trillion. During the administration of President Obama, it increased from $10.6 trillion to $19.9 trillion. Thus, the national debt has more than doubled in 10 years and it is still increasing nearly $1 trillion per year.

According to the Congressional Budget Office, the national debt for this fiscal year will be $897 billion and will top $1 trillion again in 2022. At that point, their forecast calls for the national debt to exceed $1 trillion annually for another seven years as the costs for Medicare and Social Security skyrocket with more Americans from the massive Baby Boomer generation retiring.

This ongoing problem has been caused by both Democrats and Republicans. For the first two years of the Trump administration, Republicans controlled both houses of Congress, yet the debt still grew by over $1 trillion per year. Thus, the national debt has increased no matter which party controls Congress and the White House.

Ideally, Congress should pass a Balanced Budget Amendment preventing any deficit spending. States and municipalities in our country must balance their budgets, so the federal government should have the same requirement. Unfortunately, since we can “print” more money at the federal level, there is no real desire to live within our means.

Another answer is congressional term limits. If members of Congress are not allowed to stay in Washington D.C. for decades, they will not accumulate so much power and become so disconnected from their constituents. Today, our representatives and senators listen more to special interests and bureaucrats than to their own voters.

Democrats believe the answer to this problem is higher taxes. All of their leading presidential candidates are calling for enormous increases in income taxes for the “wealthy.”  In reality, the results from the past few decades clearly show that the best approach is to cut federal taxes. Currently, the country is enjoying a booming economy partly due to the aggressive personal and corporate tax cuts that were signed into law by President Trump.

The most effective way to deal with the national debt has always been the same, reducing the size of the gargantuan federal government. Here are just a few of the many ideas on how this can be accomplished:

Other solutions include bringing home troops that are stationed in many wealthy foreign countries that can afford to handle their own defense needs. In addition, if we cap Medicare growth to just one percent per year the savings would be significant.

The ideas are plentiful, but the political will is missing in Washington D.C. The only way this crisis will ever be solved is if the American people demand action. A great time to generate the public response will be the upcoming election.

Hopefully President Trump will make addressing the federal debt a signature issue for his re-election campaign. In contrast, Democrats have been embracing the “Green New Deal” of U.S. Representative Alexandria Ocasio-Cortez (D-NY) which is expected to cost the taxpayers of our country tens of trillions of dollars. Her ludicrous plan, if enacted, would make our horrible debt situation much, much worse.

Our ballooning national debt is another reason that common sense Americans need to work tirelessly between now and November 2020 to ensure that the Democratic Party is not able to take control of Congress and the White House. If that nightmare scenario happens, the fiscal consequences alone for our country would be catastrophic. Across the rest of our political landscape, the severe difficulties that would ensure from enacting their dangerous and socialist plans are incalculable. In essence, to save our country from ruin, the Democrats must be defeated.