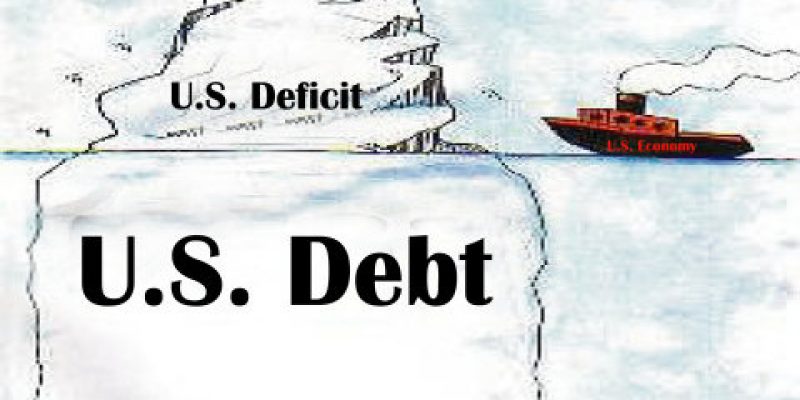 The federal deficit will increase to $897 billion this year but won’t surpass $1 trillion for another three years, assuming no changes are made to reduce it, according to a report from the Congressional Budget Office. Still, the accumulated U.S. debt is at its highest level since World War II, the CBO reports.

This latest report indicates a reversal from previous CBO projections, which indicated the deficit would surpass $1 trillion by 2020. CBO attributes the difference to less money the federal government spent on emergency relief toward hurricanes and other natural disasters.

Interest costs on the debt were also lower than expected last year.

“The federal budget deficit is about $900 billion in 2019 and exceeds $1 trillion each year beginning in 2022,” the analysis said. “Over the coming decade, deficits (after adjustments to exclude shifts in the timing of certain payments) fluctuate between 4.1 percent and 4.7 percent of gross domestic product well above the average over the past 50 years.”

Bill Bergman, director of Research at the Chicago-based Truth in Accounting nonprofit, points out that the language the Financial Report of the U.S. Government (Treasury) uses in its introduction to the balance sheet appears to contradict the U.S. Constitution.

He notes the Treasury Department states, “There are, however, other significant resources available to the Government beyond the assets presented in these balance sheets. They include the Government’s sovereign powers to tax, and set monetary policy.”

“Note the language: Capital G, Government. Possessive S, on ‘Government’s Sovereign Powers,’” Bergman said. “I thought ‘We The People’ were sovereign in the United States of America.”

TIA doesn’t make projections like the CBO, rather it looks closely at the cash-accounting-based budget deficit number and the change in the accrued but unfunded obligations facing our national government.

“In the last five years, this measure of ‘deficit’ has swamped the reported budget number, averaging almost $5 trillion a year,” Bergman said.

The CBO states that annual deficits, which average 4.4 percent for the coming decade, are significantly higher than the 1.8 percent average projected growth of the U.S. gross domestic product. The report also states that the recent Tax Cuts and Jobs Act tax cuts, combined with increased spending, are not “typical economic policy.”

“That average deficit is not only large but also unusual for times of low unemployment,” CBO Director Keith Hall said in a statement. “At the end of 2018, the amount of debt held by the public was equal to 78 percent of gross domestic product. In CBO’s projections, debt equals 93 percent of GDP by 2029 and about 150 percent of GDP by 2049. Even at its highest point ever, just after World War II, debt was far less than that: 106 percent of GDP.”

The CBO states the central factors driving growing deficits show no signs of slowing. Entitlement payments, like Social Security, are growing as the country’s population ages.

However, the deficit can be cut, Nick Gillespie, Editor at Large at Reason, told Watchdog.org.

“Economists on all ends of the political spectrum agree that large, persistent national debt reduces future growth tremendously,” he said. “So-called debt overhangs, when the debt is 90 percent or greater for five or more years in a row, [it] typically reduces annual growth by one full point, from 3 percent to 2 percent for decades. For most of the 21st century, we’ve been in such a situation and our growth has been far below the historical average. We need to reduce the debt-to-GDP ratio immediately and without apology or exception, by holding spending constant or reducing it year over year.”

“Medicare, Social Security, and defense spending need to be at the top of the list, as they are the biggest items,” Gillespie adds. “The good news is that over the past 30 years, no fewer than nine OECD countries managed to cut their structural deficits by 10 percent, so it can be done. Even better, their economies improved, as business owners, taxpayers, and investors realized that they would not get stuck with higher taxes, reduced benefits, or inflation to pay for a party that had ended long ago.”

The CBO said the 35-day federal shutdown was expected to reduce U.S. economic output by $11 billion in the most recent two quarters. But this would be reduced by delayed spending activity by the fourth quarter of 2019, ultimately resulting in a total of only $3 billion cut from projected U.S. economic growth.

Bergman points to the shutdown and the president’s 2019 State of the Union Address as problematic for questions related to U.S. sovereignty.

Interested in more national news? We've got you covered! See More National News
Previous Article The Bloodbath In Venezuela Is Beginning, And Our Involvement Is Inevitable…
Next Article Three of seven legislative races head to run-offs after Saturday special election