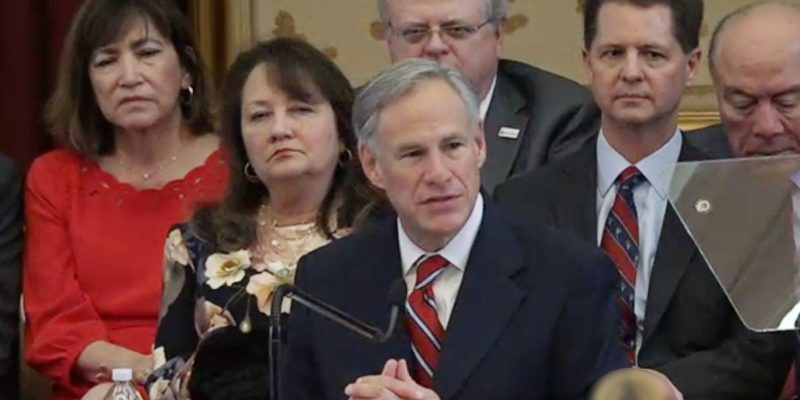 In what is essentially the Texas version of the SOTU, Gov. Greg Abbott fast-tracked several “emergency items” for the 86th Legislative session including:

Designating emergency items is one of the few key powers wielded by the Texas Governor. The might of the Governor rests largely in appointments and a short veto period toward the end of session. The Texas Constitution prohibits the state House and Senate from passing legislation during the first 60 days of a regular legislative session — unless either chamber suspends the rule by a vote of four-fifths of its membership, or if a particular subject was listed as an emergency item.

By this speech, Gov. Abbott laid out what the remainder of the first half of the legislative session (which runs through May) will look like. These items came as no surprise, and the governor didn’t exactly leave any sharp blades on the table for his critics to grasp. We analyze the topics of his speech below:

Increasing teacher pay — This was part of a special legislative session call in the summer of 2017, which would have provided $1,000 per year for public school teachers. The educrat establishment all but ignored this olive branch. This time, though, the plan is tied to teacher performance, and up to six figures in high-risk schools for dauntless teachers. He referenced the Dallas Independent School District as a possible model.

School security — This usually means more money for metal detectors and cops giving actual tickets to children for hallway hi-jinx. Second Amendment activists smell gun control in the wings (and especially with a pro-gun-control Democrat in charge of a key committee), but we’ll give the guv the benefit of the doubt for now.

Mental health funding increase — like teacher pay, the specifics are vague, but it has been the general consensus of the powers-that-be that more mental health services in Texas could help prevent tragedies like we saw in Sutherland Springs and, related to above, the Santa Fe school shooting. Other suggestions were laid out, such as expanding “tele-medicine” to mental health (which would most likely save the state and the consumer money).

Border security — Short of calling for the partial funding of a border wall, the Governor laid out the importance of the $800 million laid out in the budget for keeping peace along the Rio Grande and combating gang violence.

Property taxation reform — This has been discussed much already but the main plan is a 2.5 percent “trigger” for an election when a local government decides to issue a tax hike. Currently that trigger is 8 percent.

Disaster response — Another non-specific item, but we have heard some calls under the Pink Dome for taking from the state’s “Rainy Day Fund” to prepare for the next major tropical storm.

What wasn’t said can also speak louder than what was said. Missing from Abbott’s speech were clear calls for pro-life legislation, Second Amendment rights expansions, ballot integrity, border wall funding, ending taxpayer-funded lobbying, and keeping boys out of girls showers and locker rooms in schools — the stuff you’d expect to hear in what is essentially a Texas SOTU, and some of which are listed as the priorities of the Republican Party of Texas. (the state GOP has recently taken a turn to the grassroots advocacy side under the Chairmanship of James Dickey).

Abbott called his agenda potentially “transformative” and urged members of the legislature to cooperate to quickly pass his emergency items.

And to the ongoing “honeymoon period” with a new Speaker?

“I am inspired by the camaraderie and collaboration that have infused this session. I feel it myself,” Abbott concluded.