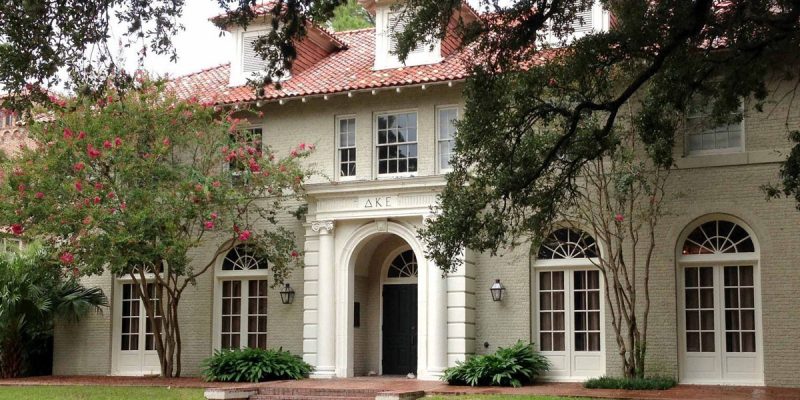 …on hazing charges, in the most recent episode putting on display the rapid decline of the Greek system at Louisiana’s flagship university. LSU’s policy of extreme policing of Greek organizations following the tragic and stupid Max Gruver episode two years ago continues apace, and there was little chance Delta Kappa Epsilon, which has long cultivated an image as the LSU fraternity most identifiable from the movie Animal House, had much chance to survive the university’s campaign.

And the hammer fell hard this morning.

Nine members of LSU’s Delta Kappa Epsilon fraternity have been arrested and accused of hazing and other related offenses after the national organization — one of the oldest fraternities in the nation — closed it’s LSU chapter last month.

“We can confirm that nine members of the LSU chapter of Delta Kappa Epsilon, or DKE, have been arrested and booked into East Baton Rouge Parish Prison for hazing-related activities that are alleged to have taken place in the fall of 2018,” LSU spokesman Ernie Ballard III said in a statement Thursday morning. “This type of behavior is unacceptable and at complete odds with what we expect from our students. It does not belong at LSU.”

DKE closed its LSU chapter following an investigation that found students violated the organization’s hazing and alcohol policies — a development that comes amid the university’s ongoing quest for safer practices within its Greek system.

Ballard confirmed last month that DKE would end its presence at LSU almost 100 years after the chapter was founded.

“This is a sad day for the university, but one that illustrates the cultural shift occurring at LSU,” Ballard said Thursday. “The quick action by the national DKE organization by revoking the chapter’s charter and the cooperation of several witnesses in this investigation demonstrate a growing recognition that hazing and other harmful activities cannot be tolerated. The LSU Police were dutifully informed of the incidents by the national organization and initiated the investigation, which concludes with today’s arrests.”

Exactly what happened to precipitate those arrests, we don’t know. The guess is the Dekes didn’t do anything last fall that was much worse than they’d done for decades, and the only real difference is that the national fraternity, which like most of the others is in full risk-management panic mode, and the university are both hell-bent on scrubbing out any vestige of the kind of good-natured lawlessness college fraternities used to be known for.

Which means there won’t be hilarious bedsheet signs hanging in front of the Deke house on Fraternity Row before home LSU football games, or stories of outrageous pranks the Dekes used to be known for. Or even the funny anecdotes about the Dekes, like when a goat was found in the house and nobody in the chapter had anything much to say about why it was there.

LSU is probably safer for having lost the Dekes. But it isn’t more fun, and the campus culture is not better for having lost so prominent an organization. And it’s pretty clear the Greek system on campus will soon be completely gone – and when it is, it’s going to be a bit harder to justify the kind of expense the public is making on LSU as a “molder of mankind” it claims to be.

The 21st century is bound and determined to scrub out as much of the cultural patrimony bestowed to it from the 19th and 20th centuries as possible. This is one more example. Whether those nine college kids ruined it for the rest of the fraternity or the national office and university devolved into hypersensitivity in killing an institution with a century of tradition on campus, we can’t say. All we know is which way the wind is blowing – and that much is unmistakable.