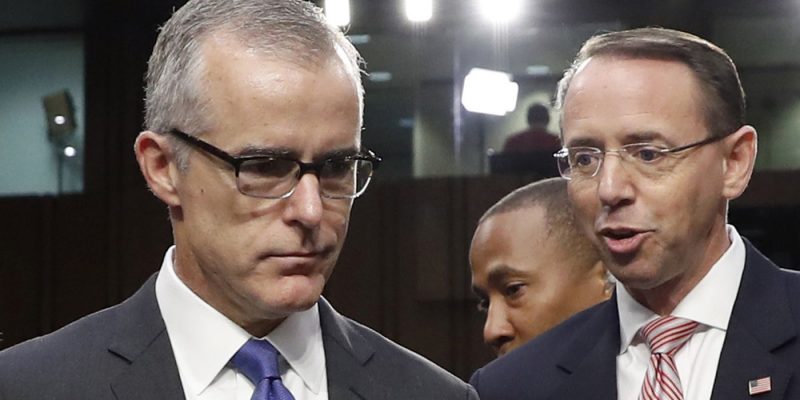 Recent statements from former FBI Deputy Director Andrew McCabe have conservatives up in arms over what some consider to be an attempted coup d’etat by federal law enforcement officials.

The accusation comes after McCabe reportedly told CBS’ “60 Minutes” that there were discussions at the Department of Justice about getting rid of President Trump via the 25th amendment by recruiting the Vice President and members of the cabinet to agree that he was mentally unfit to finish his term.

The New York Times reports that “top Justice Department officials were so alarmed by President Trump’s decision in May 2017 to fire James Comey, the bureau’s director,” that they contacted several cabinet members to test their receptiveness to replacing the President.

CBS interviewer Scott Pelley said that was the most interesting thing about the interview, “The most illuminating and surprising thing in the interview to me were these eight days in May when all of these things were happening behind the scenes that the American people really didn’t know about.”

“There were meetings at the Justice Department at which it was discussed whether the vice president and a majority of the Cabinet could be brought together to remove the president of the United States under the 25th Amendment… These were the eight days from Comey’s firing to the point that Robert Mueller was appointed special counsel. And the highest levels of American law enforcement were trying to figure out what do with the president.”

Andrew McCabe also lended credibility to the rumor that the idea was floated of agents wearing a wire when talking to the President. That was something that former Deputy Director Rod Rosenstein previously downplayed as a joke along with any mention of invoking the 25th amendment. However, McCabe reportedly insists that neither were a joking matter.

Whether it was a joke or not actually makes a huge difference as their is no legal basis for DOJ employees to be recruiting support to oust the commander-in-chief. If it was not a joke then it is certainly not a laughing matter as instigating a coup against the sitting President of the United States is, arguably, treason.

The full “60 minutes” interview with former FBI Deputy Director McCabe will air on Sunday on CBS.

McCabe was fired by then-Attorney General Jeff Sessions just days before his planned retirement. Sessions was fired by Trump promptly after the mid-term election.

Disgraced FBI Acting Director Andrew McCabe pretends to be a “poor little Angel” when in fact he was a big part of the Crooked Hillary Scandal & the Russia Hoax – a puppet for Leakin’ James Comey. I.G. report on McCabe was devastating. Part of “insurance policy” in case I won….

….Many of the top FBI brass were fired, forced to leave, or left. McCabe’s wife received BIG DOLLARS from Clinton people for her campaign – he gave Hillary a pass. McCabe is a disgrace to the FBI and a disgrace to our Country. MAKE AMERICA GREAT AGAIN!

“Trying to use the 25th Amendment to try and circumvent the Election is a despicable act of unconstitutional power grabbing…which happens in third world countries. You have to obey the law. This is an attack on our system & Constitution.” Alan Dershowitz. @TuckerCarlson