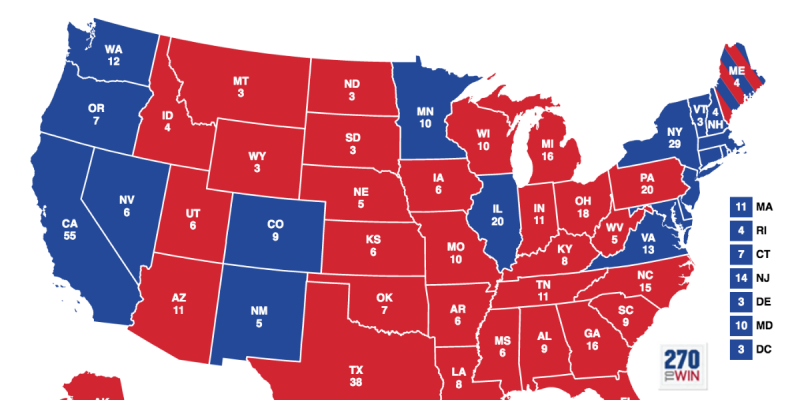 A movement to effectively nullify the electoral college in the United States is quietly gaining steam after the 2016 presidential election in which President Trump lost the popular vote but won the election over Hillary Clinton.

The “National Popular Vote” bill is being proposed as an inter-state compact which will take effect if and when enacted into law by states possessing more than 270 electoral votes.

If successful, the agreement would guarantee the Presidency to the candidate with the most popular votes and render the electoral college nothing more than a symbolic gesture.

According to the website nationalpopularvote.com which supports the initiative, the bill has been fully enacted into law in the following 11 states plus the District of Columbia:

Just this week, the New Mexico State Senate passed the compact and sent it to the desk of Governor Michelle Grisham (D). New Mexico has 5 electoral votes.

If the compact is signed by both the Colorado and New Mexico Governors, proponents of the bill will have an additional 14 electoral votes which will bring the total to 186 of the 270 needed.

The State of Maine is currently ‘fighting it out’ over the bill. Former State Senator and candidate for U.S. Senate, Eric Brakey (R), founded an organization called “Free Maine Campaign” which has over 2,000 likes on Facebook. In a recent radio interview, Brakey had the following to say:

“This is a terrible, very poorly thought out idea being pushed by Senate President Troy Jackson that would bind Maine’s 4 electoral votes to the National Popular Vote. It would give more power to cities like New York and Chicago over how Maine’s votes are cast for President than we ourselves as Maine people would have.”

“If this scheme succeeds, I have no doubt that it will result in a Constitutional Crisis that requires a ruling by the United States Supreme Court.”

Maine’s passage would leave the compact’s coalition at 191 electoral votes, 79 away from the magic number of 270.

There have been only five instances in American history where the popular vote did not reflect the outcome of the electoral college: