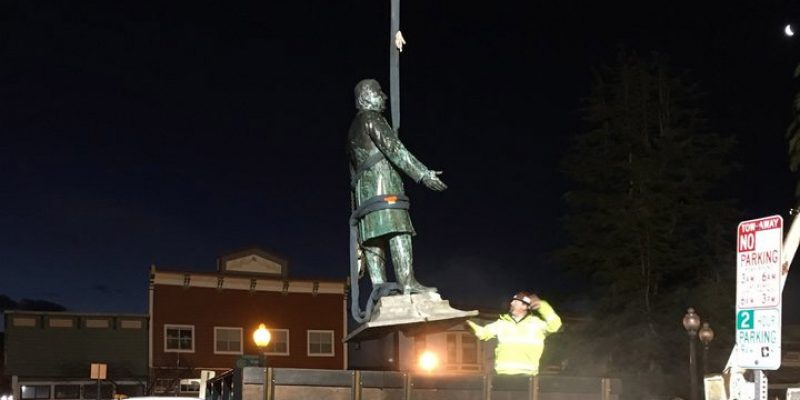 A statue of William McKinley was removed in the early hours Thursday by city workers in small-town Arcata, Calif.

Yes, that McKinley. The former President of the United States. The namesake of the mountain formerly known as Mt. McKinley. The JFK of his day who also fell victim to an assassin’s bullet. A hero of the Republican Party and symbol of America’s rise as a global superpower. And, according to some leftists apparently, the poster child for U.S. imperialism (despite the facts that he liberated Cuba and brought Guam, the Phillippines, and Puerto Rico in as protectorates during a time of significant upheaval and poverty).

The city of Arcata, a town of about 20,000 in coastal Northern California (far removed from any Confederate monuments for leftist radicals to release their frustrations upon) has, over time, debated the appropriateness of their McKinley statue. “Bill,” as the statue is often called, was a prominent fixture on the town plaza, having been gifted to the city by an early businessman who was a fan of the fallen president. A Change.org petition claiming the statue is part of various (allegedly) racist symbols in the city gathered around 1,300 signatures by the time of a December meeting in which a city department discussed the fate of the statue.

Local blog Lost Coast Outpost explained the meeting took place during a time when cities like Arcata were confronted by liberal activists wishing to remove symbols such as statues and plaques to bygone eras they feel represent systematic racism or colonial oppression using the horrific Charleston mass shooting as a wedge. The most recent removal was in Dallas, where a prominent statue of Robert E. Lee was removed from a city park. A significant pushback has begun in the Texas Legislature with a bill to require votes for the removal of historic landmarks on public grounds.

The city of Arcata indicated in a press release it is in discussions with the city of Canton, Ohio — McKinley’s final resting place — to relocate the statue. Arcata, it should be noted, is a liberal stronghold with the distinction of becoming the first U.S. city to have a Green Party majority in their city council.

William McKinley was the 25th President of the United States, serving from March 4, 1897, until his assassination on Sept. 14, 1901, after leading the nation to victory in the Spanish-American War and raising protective tariffs designed to promote and protect American industry. He was shot by Leon Czolgolz, a leftist Anarchist who was later convicted and executed.