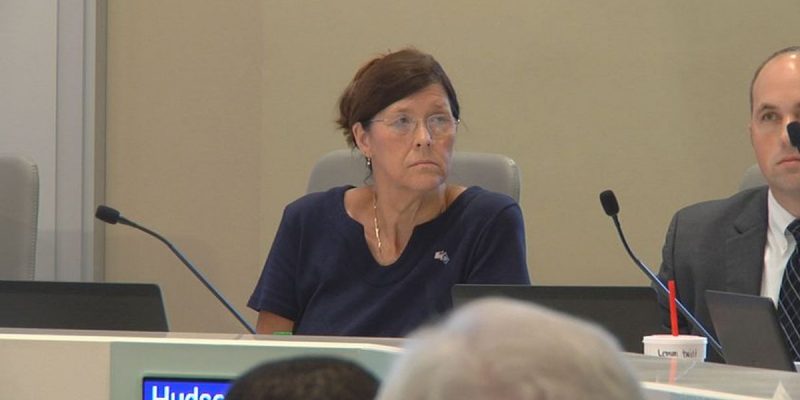 By the headline, we don’t mean to imply that Amoroso, the widow of former Metro Councilman Buddy Amoroso who tragically passed away in a bicycling accident last year, is some damsel in distress. She is, however, her husband’s successor on the Baton Rouge Metro Council and she’s on the ballot in a special election for the District 8 seat. Which means she needs your help, assuming you’re in her district, to keep that seat Republican.

Amoroso’s voting record since taking office last year after a shameful, ugly and sadly illuminating row at the Metro Council over her appointment has mirrored what Buddy’s would have been. So far she’s been a pretty stalwart conservative, though not a firebrand, on the Metro Council. She’s handled her job with grace and has not become vitriolic over the abuse she was forced to take by four of the five Democrats on that council, who somehow thought they were entitled to deny her a chance to finish Buddy’s term just because they’d have preferred to flip a thoroughly Republican district to the “D” side, and in so doing change the Council’s majority.

Now there’s an election, and Amoroso has a Democrat opponent who would be an unmitigated disaster for Baton Rouge.

How one pronounces Brendan Csaposs’ name is a question we’ve no answer to, but his agenda and support in the race to be decided Saturday is not in doubt. He’s taken some $12,000 or so in campaign donations, mostly in small amounts the significant majority of which has come from out of state – and specifically from the East Coast and California.

And why would that be? Because a large chunk of those donations have come via something called the “LGBTQ Victory Fund,” which advertises Csaposs as potentially one of only two LGBTQ officeholders in Louisiana. From the page soliciting donations for his candidacy, a bio…

Brendan Csaposs is a Principal-in-Residence with IDEA Public Schools in Baton Rouge, LA. Currently in his 10th year in education, he helped found a new public school serving historically underserved students in 2018. Brendan grew up in upstate New York. He received his Bachelor’s degree in LGBT Studies and Music from Hobart College in 2009, his Master’s Degree in Educational Leadership from The George Washington University in 2016, and is currently pursuing a Doctorate of Education at the University of Arkansas.

As a passionate advocate for equity, Brendan has been working vigorously since moving to Baton Rouge in 2009 to support the right of all students to an excellent, college-preparatory education, regardless of their race, class, or geography. Despite being a transplant, he quickly fell in love with the people, culture, and food of Southern Louisiana, and decided to make the state his long-term home. Seeing the challenges his students faced, he decided to seek out ways to improve quality of life for all in our state.

In 2018, while reflecting on his role in the work to be done in the local community, he made the decision to undertake a run for East Baton Rouge Metro Council, with the belief that in this elected position, he could better effect change for the people of the city and parish. Running on a platform of LGBTQ inclusion, police reform, and small business reinvestment, he hopes to impact change in the years to come across the Baton Rouge cityscape and beyond.

Look, if you’re gay it’s none of our business. We don’t really care, and we don’t want to know. But anybody who thinks Baton Rouge’s multiplying public-policy problems are going to be solved with a focus on “LGBTQ inclusion” isn’t really informed enough to make an intelligent vote for Metro Council. How is “LGBTQ inclusion” going to improve traffic and drainage? How is it going to solve the exodus of middle class citizens, jobs and capital out of East Baton Rouge Parish? And does anyone think District 8’s voters really want “police reform” at a time when the BRPD is shrinking amid poor morale?

Maybe the worst thing about Csaposs’ campaign is the irritating postcards it’s ginning up from leftists across the fruited plain in order to bombard residents of District 8 with junk mail. That’s thanks to a web site called postcardstovoters.org, which solicits worthless messages from the kinds of people who engaged in that atrocious campaign of harassment of Trump electors after The Donald won the 2016 presidential election. As such, District 8 residents have been drenched in spam from people most of them have no interest in relying upon for influence in how to vote…

Challenger Brendan Csaposs’ messages come handwritten and with stamps canceled in faraway places. The feel is decidedly grassroots, even if it makes one wonder why someone in Hawaii or Washington is interested in Baton Rouge politics.

“Aloha. I’m writing from Hawaii to ask you to vote because we’re all in this together!” an unidentified writer pleas with the “Crucial Voter” in the Carrington Place subdivision. A writer from Yakima, Washington, sends a similar message to an “Awesome Voter,” saying “a balanced Council will see Baton Rouge at its best.”

Republicans currently hold a 7-5 edge on the Metro Council. Should Csaposs win, the panel would be split evenly politically.

Csaposs is benefiting from the work of postcardstovoters.org, a Georgia-based group of volunteers that backs Democrats by mailing postcards to like-minded voters in the days leading to an election.

It has done similar work for candidates in other states. According to its website it notes that it started two years ago and now has 59,000 volunteers in every state.

“Postcards to Voters are friendly, handwritten reminders from volunteers to targeted voters giving Democrats a winning edge in close, key races coast to coast,” it says. It did not return telephone calls seeking comment.

Postcards To Voters apparently doesn’t microtarget as well as it says it does, because we’ve heard from multiple hard-core Republicans that they’ve been bombed with these stupid postcards from places where the dominant politics couldn’t be any further from that of southeast Baton Rouge.

It’s an altogether awful campaign, and one which doesn’t have the appearance of a competitive chance. In Buddy’s last election he pulled 65 percent of the vote against a pair of Democrat challengers, and we expect Denise will do something similar. But in what’s expected to be a low-turnout race, with lots of people not even aware the seat is up for re-election Saturday, there is an element of unpredictability nobody should be comfortable with.

So if you’re in District 8, make sure to vote on Saturday. Don’t let the Metro Council’s Republican majority go by the boards to somebody whose campaign is financed out of places like Altamont, Oakland and Hyannisport.