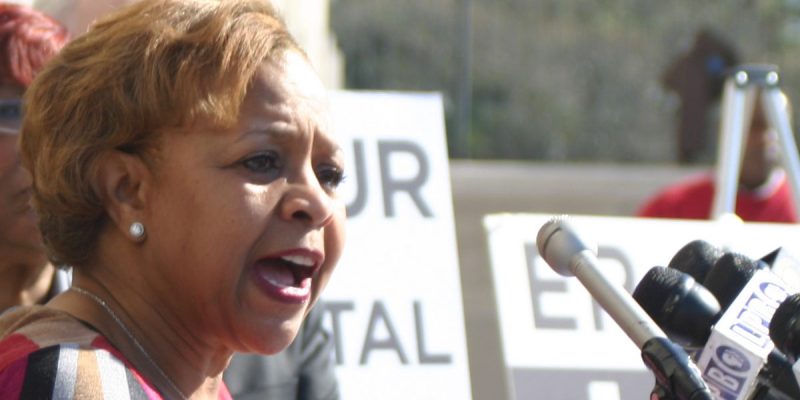 …as Colomb’s time grifting in the Louisiana Senate on taxpayer dollars will mercifully come to an end in January.

We know that Colomb has been a thief preying on the state treasury for practically her entire legislative career – that came courtesy of then-Treasurer John Kennedy, who took her to task for a bogus non-profit she was running to take state appropriations, and filtering cash from that non-profit into her own household coffers. From 2013 was the story of how Colomb screamed bloody murder when Kennedy demanded she show documentation that some $300,000 the state gave to her foundation supposedly to promote breast cancer awareness was actually spent for that purpose.

And from 2014 was the story of how after Colomb had greatly violated campaign finance limits on donations from political action committees state legislators are allowed to receive she shamelessly attempted to pass a bill to lift those limits.

Rather than bore our readers with a litany of her other gross insults to political ethics, we’ll just skip ahead to the most recent example, which is Colomb’s bill filed in advance of this legislative session starting in two weeks – namely, a naked attempt to dilute the votes of people in South Baton Rouge on questions of local sovereignty…

A Baton Rouge lawmaker has filed legislation that, if approved, would permit all voters in East Baton Rouge Parish to weigh in on the city of St. George incorporation, rather than just those who reside in the designated unincorporated area, as current law allows.

State Sen. Yvonne Colomb, D-Baton Rouge, is sponsoring Senate Bill 63, which provides an exception for parishes with a population of more than 440,000, allowing a parishwide vote in a special election to determine whether an unincorporated area in the parish shall become its own municipality.

The bill would seem to apply only to East Baton Rouge, as it is Louisiana’s only parish with more than 440,000 residents, and, of course, is where the St. George incorporation effort is playing out. Colomb could not be reached for comment by this morning’s deadline.

This garbage has been attempted at the Legislature before, and it hasn’t passed. It won’t pass this time – it might well get through the Senate, though we doubt that, but it has absolutely no chance of passage in the House.

And Colomb knows that, which means what she’s doing here is pandering to the city-hall mob in Baton Rouge which is frantic in its efforts to throw the kitchen sink at the St. George incorporation effort in advance of what will probably be an October vote on the new city (and it seems pretty obvious that the incorporation will pass once the voters of what’s to be St. George get an opportunity to be heard). Colomb knows she’s termed-out and she’ll need to find a new gravy train to get on, so gestures like this are opportunities to put herself at the platform to wait for that next train.

Which could be with the city-parish government, or with some new bogus non-profit that pulls your tax dollars out of whatever little honey pot might be on offer.

But that can’t be helped. What can be helped is that Yvonne Colomb will not be an elected official in Louisiana by this time next year thanks to term limits. It might be small comfort that her Senate seat is held by either Cleo Fields or Pat Smith, neither of whom have a legislative record any better than Colomb’s is, but it’s a comfort nonetheless.

Interested in more news from Louisiana? We've got you covered! See More Louisiana News
Previous Article If You’re In South Baton Rouge, Don’t Forget To Save Denise Amoroso On Saturday!
Next Article SADOW: No Need For Legislature To Hike Louisiana’s Gas Tax