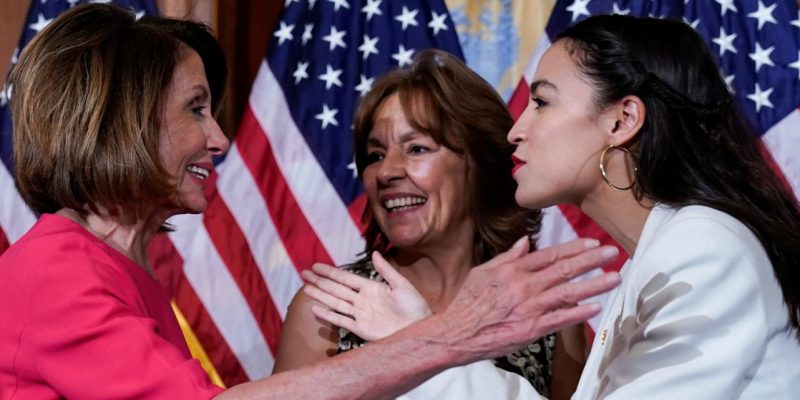 House Speaker Nancy Pelosi (D-CA) and U.S. Rep. Alexandria Ocasio-Cortez (D-NY) got off to a rocky start but currently find themselves with a mutual enemy- moderate Democrats who occasionally vote with House Republicans.

Both the Speaker and the freshman Congresswoman issued firm warnings to fellow party members before critical votes in the House on Thursday.

“This is not a day at the beach. This is the Congress of the United States… We are either a team or we’re not, and we have to make that decision,” Pelosi reportedly said to a group of House Democrats.

Pelosi continued by emphasizing that party members who demonstrate “courage” by voting against Republican motions on the house floor would become bigger priorities for re-election and appointments.

Rep. Alexandria Ocasio-Cortez raised the stakes, adding that Democrats who vote with Republicans are “putting themselves on a list”, according to a spokesperson.

The aide explained that a group of liberal activists will likely be provided a list of primary targets based on their party-line voting record:

“She said that when activists ask her why she had to vote for a gun safety bill that also further empowers an agency that forcibly injects kids with psychotropic drugs, they’re going to want a list of names and she’s going to give it to them.”

AOC reportedly made the infighting about President Trump in the meeting:

This is just the most recent example of Democrats being pushed further left by Party loyalists and self-proclaimed “democratic socialists” which could jeopardize more than two dozen swing districts during the 2020 election.

If this continues, moderate members will be forced to make the difficult decision of which is more valuable to their re-election: party loyalty or a less-than-extreme voting record.

U.S. Congressman Mike Johnson of Louisiana’s 4th district shared the news on his official facebook page with the following comment:

“The Socialists and radical leftist Democrats are demanding total allegiance in their ranks. They tolerate no dissent in the public square–and now, even in their own party.”

Interested in more national news? We've got you covered! See More National News
Previous Article Media Bias Heavy On Texas Health Committee; Here’s The Other Side
Next Article APPEL: Things Everybody Knows About Teachers’ Unions And A Pay Raise