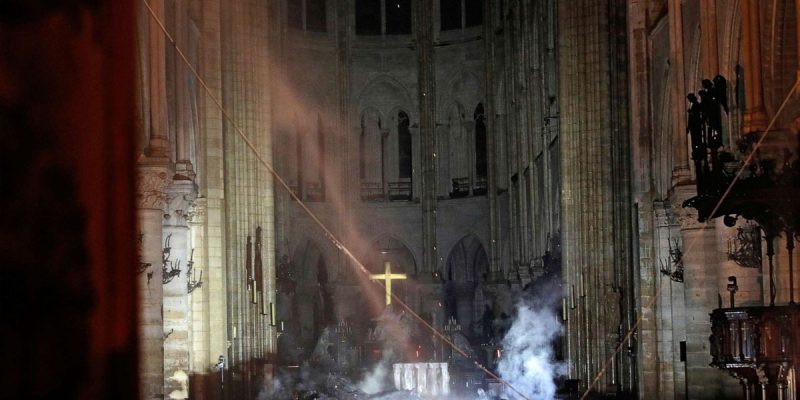 Many years ago while sitting in a rear pew at St. Louis Cathedral in New Orleans I heard a masterful homily delivered by  retired Archbishop Philip Hannan, whose sermon centered on the tribulations that visited the Catholic Church over the centuries.

The part of his homily really caught my attention was when the “jumping padre” touched on the effect the French Revolution had on Catholicism in a country that was considered the church’s “eldest daughter”.

The Jacobin revolutionaries sought to overturn the entire existing French society, from the government down to the calendar.  Having enjoyed a dominant role in French culture, the Catholic Church was caught in their crosshairs and was targeted for dismantling.  Priests and nuns were carted off to the guillotine, including one elderly abbess who was accused of treason, despite being both blind and deaf.

She and her sister religious were executed and interred in a mass grave near where the Revolutionary War hero the Marquis de Lafayette is buried.

Even art did not escape defilement in the “New Age”.  Religious imagery in churches and graveyards were torn down and a new atheistic “Cult of Reason” became the de facto revolutionary church.

Notre Dame Cathedral, the second most important church in Europe, was desecrated by the Jacobins as they held a “Festival of Reason” under its roof, with a scantily clad woman serving as the goddess.  Religious statues and imagery within the cathedral were “guillotined” as symbols of the new order, though the structure itself remained intact.

As the revolutionary upheaval continued, the iconic house of worship and symbol of Paris was repurposed into a crumbling warehouse until Napoleon restored Notre Dame back to the Catholic Church and made it the scene of his coronation as emperor.

What the Jacobins did to profane one of the most important churches in Christendom was far worse than what is still officially classified by French authorities as an “accidental fire.”

Footage of the burning 19th century steeple collapsing to the ground and the flames consuming the cathedral’s roof caused many to fear that the cathedral would be a total loss.  Fortunately the conflagration was finally extinguished thanks to the dedication of hundreds of Parisian firemen and some of the cathedral’s treasured relics were rescued by a determined cleric.

These acts performed at great personal risk reflect the heroic human spirit in the face of tragedy.

That so many Frenchmen of means have stepped up to pledge hundreds of millions of euros for the reconstruction and restoration underscore the nation’s commitment to preserve France’s most important landmark.

That the inferno did not destroy the cathedral’s famed rose windows and left much of its stained glass and signature towers and flying buttresses has been a miraculous blessing.  Many religious people have taken the image of the intact gold cross behind the altar as a sign of God’s protection while the irreligious and anticlerical have mocked that belief (and the believers, as many atheists are wont to do), citing the temperature at which certain items burn.

Never mind the fact that the golden cross and altar could have just as well been smashed by falling debris or a structural collapse.

The image that I found most stirring was taken from the cathedral’s front door while the blaze consumed its roof.  It was as if the Gates of Hell had opened where the steeple had fallen yet around the wall of flames, yet the interior of the church remained strong.

Notre Dame has a special place for me, and it has little to do with its gargoyle ornamentation or even its history.

Many years ago on my first trip to Europe, I visited both Rome and Paris.  Being a practicing Catholic, a pilgrimage to the Vatican, the center of my religious faith, was something I had long wanted to do.  Yet at the conclusion of my “Roman holiday” I felt a sense of disappointment, finding St. Peter’s to be too touristy, Disneyfied if you will, and the papal audience, led by no less of a personage than John Paul II, to be more pep rally than religious experience.  It pained me to admit that I simply did not get anything out of it.

Yet on the tail end of the trip, I made the spiritual reconnect in Paris inside Notre Dame.  Attending a Saturday evening vigil Mass inside the dark medieval cathedral, I had found in Paris that which was missing in Rome.  In Notre Dame, I did not feel as if I was inside a tourist attraction but a religious temple.  The Mass was celebrated in a hushed tone in the beautiful French language and the modest crowd present at the religious celebration were there for worship and not to sightsee.

Yes the eight centuries-old Notre Dame is an irreplaceable historic structure and culturally significant UNESCO monument, but most of all, Notre Dame is today what it was built to be when its cornerstone was laid down almost a millennium ago.

A house of worship.

Perhaps this tragedy will spur the Church’s eldest daughter into making its own spiritual reconnect.

Interested in more national news? We've got you covered! See More National News
Previous Article VIDEO: Did You See How Ridiculous Bernie Sanders Looked When Asked About His Taxes?
Next Article The Hayride’s 2019 @Large Tour Stop In Baton Rouge Is Just More Than A Week Away…