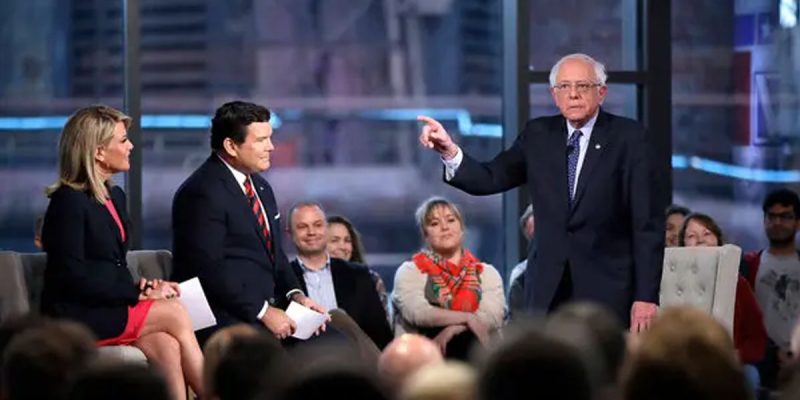 We have two video clips from last night’s Bernie Sanders town hall on Fox News, which lots of you didn’t watch and are fully excused from having to endure it. Sanders is, as we all know, the most perfect hypocrite of many in the 2020 Democrat presidential field – a scolding curmudgeon bashing the rich while having become one of them through what certainly appears to have been shady means.

And while Fox News hosts Bret Baier and Martha McCallum didn’t give Sanders’ capitalistic exploits, such as they are, a full examination they did probe Sanders’ attitudes toward taxation in relation to his own fortune. Here’s one clip of that, in which Baier notes that Sanders accepted the Trump tax cut on his taxes last year while publicly railing against it and demanding tax rates on the rich go in a different direction. Sanders proceeded to splutter about how he paid what he owes and then immediately descended into whataboutism, demanding that Donald Trump be called on the carpet for his own taxpaying habits.

Sanders: “Pfft…come on…I am, I paid the taxes that I owe…why don’t you get Donald Trump up here and ask him how much he pays in taxes” pic.twitter.com/MNAVs3TOnv

But things didn’t get any better for Sanders when McCallum ventured into the subject of Sanders’ wealth tax idea and whether he would be willing to lead on the issue by offering up 52 percent of his income as an example for the rest of America. That was met by more spluttering…

MacCallum: “So would you be willing to pay 52% on the money that you made? You can volunteer, you can send it back”

Bernie: “You can volunteer too…why don’t you give? You make more money than I do”

Baier: “And she’s not running for POTUS” pic.twitter.com/zn4XrzJIXG

Baier and McCallum could have hit Sanders a little harder, but these clips were quality television nonetheless. They expose Sanders as a fraud and a hypocrite – the source of his wealth, he claims, is that he’s a bestselling author. That’s highly dubious, as there are lots of questions about his authorship and the sales of his literary works.

For example, did Bernie Sanders ever write a best-selling book? Daniel Greenfield notes that might not be exactly true…

Our Revolution, the tome that made Bernie a 1 percenter, lists no author. Like other politicians, you’re supposed to assume that Bernie wrote it in his own voice. Numerous reviews praise its authenticity.

Did Bernie break a lifetime’s habit and actually do some work? Or, like everything about him, is it a lie?

Our Revolution lists no co-author. But the website of Kevin Anderson & Associates, a ghostwriting firm, claims that copyediting on Bernie’s book was done by Thomas Cherwin. Cherwin is listed as a “Ghostwriter & Editor”. Did Bernie just happen to go to a ghostwriting firm for some editing or for some writing?

Sanders also spun up a 501(c)4 organization by that same name, and hasn’t been fully transparent about either its donors or its spending. Which begs the question – did Our Revolution, the 501(c)4, buy a sizable number of copies of Our Revolution, the book? That’s a time-honored scam among politician authors and a way to convert campaign donations into personal swag. Perhaps Baier and McCallum should have queried Sanders about his book sales.

Even so, what was wrangled out of Sanders on the tax issue is damning enough. Not to mention the paltry 3.4 percent of his income paid to charitable causes, a number which makes him one of the stingiest men ever to seek the White House – particularly when Sanders is such a big fan of forcibly extracting YOUR money to service your fellow man as he would choose to do.

Interested in more national news? We've got you covered! See More National News
Previous Article Up to 500 firefighters could be laid off in order to implement Prop B
Next Article Abraham And Rispone Both Argue They’re The Best-Positioned Challenger To JBE Based On Fundraising…