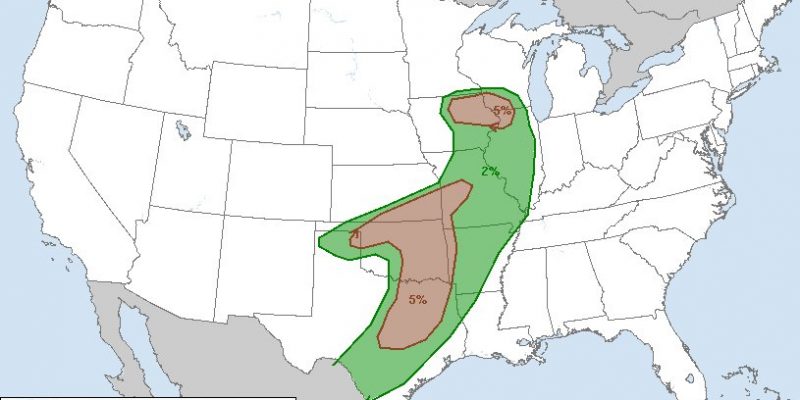 Tornados, high winds, and hail are expected to hit at least nine states between Wednesday and Friday, sweeping north through Texas up into Oklahoma and the Midwest on Wednesday.

The Dallas and Austin areas are expecting hail, possibly 2 inches or more, in diameter and damaging winds up to 60 mph.

Thursday: Louisiana and Mississippi will be at risk, with storms moving on  through the evening into Alabama and Georgia. Cities at risk include Baton Rouge and New Orleans; Mobile, Birmingham and Montgomery; and Memphis and Nashville.

CNN reports that the storms will travel from the Texas Panhandle to the Carolinas– affecting 91 million people–covering 1,400 miles.

“The greatest threat will be damaging winds and very large hail, but tornadoes will also be possible,” the National Weather Service said.

Here are the target areas for #tornado potential each day Wednesday thru Friday as storm system evolves across the central/southern US. Target is just west of Gainesville into southern OK Wednesday late afternoon to evening for monster hail producers, likely to impact DFW area pic.twitter.com/rA6TiOqYCd

After the biggest tornado outbreak of the year so far this past weekend, another round is in the forecast Wednesday-Friday. TOR:CON values are already up to 5. We are LIVE now breaking down the threat so you can be prepared. pic.twitter.com/lcFgIkaPr9

By Friday, Florida is expected to have severe weather.

A severe storm system has already brought tornadoes to areas in Mississippi, Louisiana, Texas and Arkansas, killing eight people over the weekend. Four people died in Texas, two in Louisiana, one in Mississippi and another in Alabama.